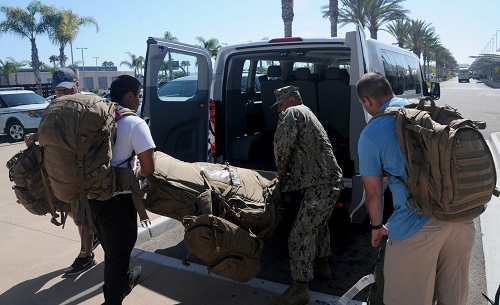 The mobilization of the Reserve Sailors in San Diego allowed ECRC to flex the knowledge of ECRC Reservists assigned to its various detachments.

“ECRC has a regular schedule to mobilize Selected Reservists from sites other than Norfolk in order exercise the capability to stand up additional Mobilization Processing Sites that would be needed in a large scale Navywide mobilization,” said ECRC Commanding Officer Capt. Joseph Rehak. “This mobilization event ensures ECRC Sailors are ready to meet the nation’s Navy manpower requirements. Selected Reserve ECRC Sailors will learn, train and do the actions required to process Reserve Sailors into the active component. ECRC Sailors who have practiced will then be able to train their shipmates during drill weekend and other events.”

The use of a location far-removed from Norfolk has many benefits.

The fact that some CRS-11 Sailors are from the Southern California area is a benefit to the mobilization events’ locale, but another factor made San Diego the right place, too.

“All of our training is in Southern California so mobilizing in San Diego gives us additional time not spent on travel,” noted CRS-11 Mission Commander Cmdr. Keith Fernandez. “Each day is valuable to training — training that is critical to mission success.”

Of the remote mobilization, CRS-11 Senior Enlisted Leader Master Chief Jeremiah Witters agreed and added, “This allows the Sailor to focus on the training and this has a fiscal benefit for the Navy, too, since potentially less cross-country travel is involved.”

Naval coastal riverine squadrons are able to defend high value assets on land or at sea and, when ordered, conduct offensive combat operations.