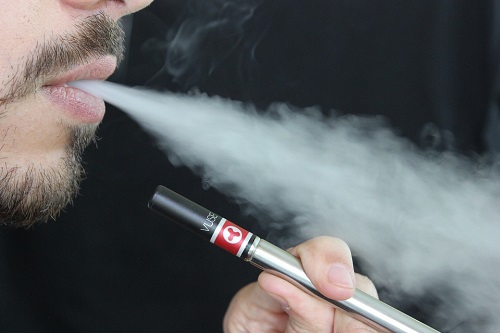 NOVEMBER 18, 2016, BREMERTON, Wash. (NNS) – There was no smoking gun, smoke on the water, or smoke screen on display at Naval Hospital Bremerton (NHB) for the annual Great American Smoke Out (GASO).

But there were perils presented and dangers demonstrated on Nov. 17, 2016, as NHB focused on the very real and at times very severe hazards associated with e-cigarettes.

“Dangers from using e-cigarettes are now a real problem. We are becoming much more aware,” said Carrougher.

Carrougher cites that UW Burn Center has treated 21 injuries since Oct. 2015 directly related to e-cigarettes. Eighty percent of the victims had flame burns, 33 percent had chemical burns and 27 percent had blast injuries.

Most of the injuries impacted facial, hand(s), thigh and groin areas.

“These are not insignificant injuries. There have been teeth lost. There has been skin grafting because of 2nd and 3rd degree burns. There have also been shrapnel wounds,” Carrougher said.
The Navy has also become well-aware of the dangers of e-cigarettes.

Compiled statistical evidence from Naval Safety Center shows that there have been 12 safety incidents – from Oct. 2015 through May 2016 – associated with the use of electronic cigarettes, vaporizers, vape pens and similar equipment containing lithium-ion batteries that have caused fire and/or explosions with Navy or Marine Corps personnel.

Seven of those incidents happened on a naval vessel, with two causing a fire that needed shipboard firefighting equipment to extinguish the flames. Eight of the dozen reported incidents happened when the e-cigarette batteries were being kept in the service member’s clothing pockets. The accidental shorting or discharge that took place resulted in first or second degree burns.

Additionally, four of the mishaps happened when the device was being used. Two were battery explosions when the e-cig was actually in the service member’s mouth causing facial and dental injuries.

Navy officials point to a growing body of evidence of considerable personal injury risk or fire associated with the use, transport, and storage of these devices based on open source information available on these products and other U.S. government studies. The reports have highlighted the inherent dangers of these devices due to the typical design that directly exposes personnel to the hazards of a battery failure, the frequent misuse of these items from common consumer modifications, the lack of fail-safe battery charging controls, and uncontrolled battery replacement and handling of spare batteries.

Commander, Naval Sea Service System Command recently recommended to Commander, Naval Safety Center, that “based on known dangers, these lithium-battery powered devices have not been authorized for use, transport, or storage on Navy facilities, submarines, ships, vessels and aircraft.”

Carrougher attests that from the American Burn Association standpoint, although information and evidence is being compiled, there is more that can be done.

“We’re beginning to notice people are reporting, but there’s still more to gather and for us to do. It’s important for colleagues in health care to know,” Carrougher said.

GASO provides Pat Graves, NHB’s Tobacco Cessation Facilitator, with a ready way to share with staff and beneficiaries to not use tobacco for at least one day.

No puffing, no dipping, no vaping.

How hard can it be?

Graves readily admits that old habits die hard, especially with those who smoke. Yet he remains committed to providing support to help anyone quit.

“The purpose and intent of holding this event is to have those who use tobacco to consider quitting for the day. From just one day can come the empowerment to hopefully quit for a lifetime. Quitting is not easy. It requires time, patience and a desire to change. The tools and experience are here to help anyone succeed,” said Graves.

GASO will wrap up with a Cold Turkey Trot 5K, providing staff and beneficiaries a physical reminder of one of Graves’ main themes he continually advocates on helping people quit.

“30 Minutes of exercise adds life…to your life! It’s obvious that it improves your physical health, but did you know it also improves your mental health? It is nature’s original anti-depressant. Exercise adds longevity! The average lifetime smoker cuts off 12 years of life,” stated Graves, adding a rhetorical question to any smoker, “Want to feel like you’ve done something today? In 30 minutes you get the personal satisfaction, sense of accomplishment, and gratification of knowing you’ve made your own life better, by doing what you know does you good. Tobacco does none of that. It rots your teeth, stinks up your hair, breath, and clothes. It costs a pack a day smoker approximately $235 a month and over $3000 a year. It puts you at higher risk for colds, flu and any old virus that comes along, and in a ‘special’ category for really unawesome things like cancer, emphysema and chronic obstructive pulmonary disease (COPD).”

And that healthier path has guideposts all along the way for any smoker to follow. According to the Centers for Disease Control and Prevention, Navy Marine Corps Public Health Center, and the US Surgeon General, if any smoker quits right now, within 20 minutes their heart rate and blood pressure drop; within 12 hours, the carbon monoxide level in their blood drops to normal; within three months, their circulation and lung function improves; within nine months, they will cough less and breathe easier; after one year, their risk of coronary heart disease is cut in half; after five years, their risk of cancer of the mouth, throat, esophagus and bladder are cut in half; after 10 years, they are half as likely to die from lung cancer and their risk of larynx or pancreatic cancer decreases and after 15 years their risk of coronary heart disease is the same as a non-smokers.

There are any number of reasons why a person starts using tobacco. There’s also a host of rationalizations that a user will fall back on to convince others, as well as themselves that it’s okay to still go ahead and smoke or dip or vape. Or all three.

“Any user can make a plan and commit to seeing it through. They can set themselves up to succeed with professional support and support from family and friends. They need to remember why they wanted to quit in the first place and why quitting is important. They can write down the reason or reasons why they want to quit and then visually remind themselves why they are stopping the nicotine habit,” Graves said.

The American Cancer Society coordinates GASO every year on the third Thursday of November. From the initial event in the 1970s when smoking and secondhand smoke were commonplace, the goal remains to reach smokers across the nation to use the date and make a plan to quit, or plan in advance and then quit smoking that day.

“On behalf of Vice Adm. Forrest Faison, Navy surgeon general and chief, Bureau of Medicine and Surgery, and my boss Rear Adm. Bruce L. Gillingham, commanding officer, Navy Medicine West, I will share our vision that our warfighters – Sailors, Marines, Soldiers and Airmen – past and present and their families will have the best health and readiness in the world. Today we have the opportunity to encourage anyone who smokes or uses tobacco products to stop and let them know that we, the healthcare team, will be their partner and link arms with them when they do. We still have work to do,” said Capt. David K. Weiss, NHB Commanding Officer.