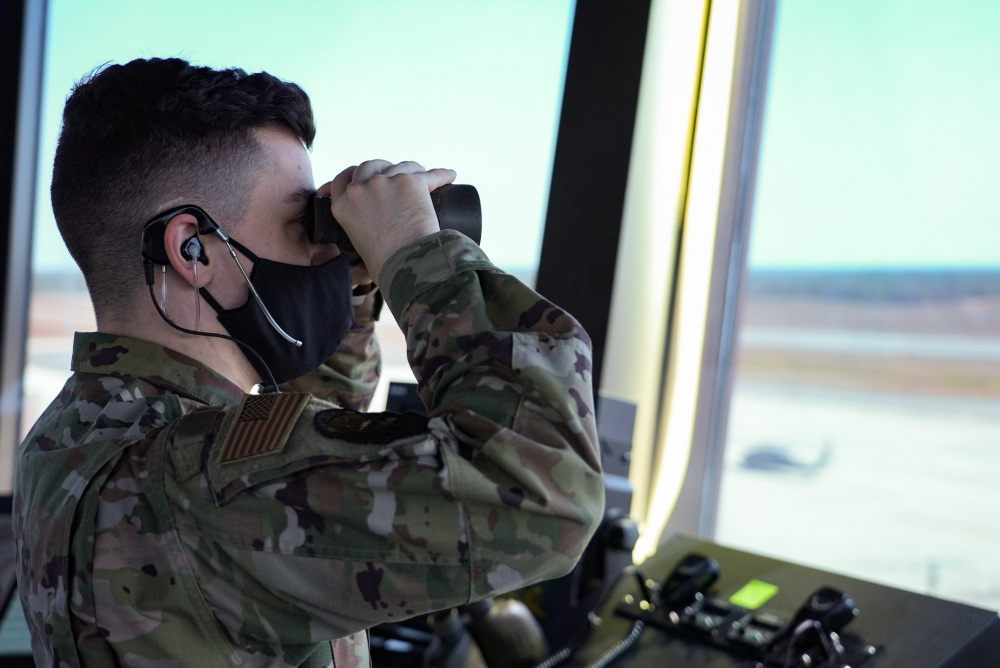 APRIL 14, 2021 – The elongated windows of the control tower offer a panoramic view of the flightline and base facilities. Screens around the room are lit with maps of planes transiting through the airspace and ambient aircraft chatter lingers in the background. To an outsider, it can seem relatively calm, but activity taking place here is shaping the military’s capabilities on the battlefield.

The Eglin Reservation houses Eglin Air Force Base, Hurlburt Field, Duke Field, Camp Rudder, 7th Special Forces Group, and a handful of auxiliary fields. The base covers 464,000 acres and accompanying airspace is used by countless mission sets throughout the Department of Defense.

“You can have explosions from the explosive ordnance disposal school right over here, guys being dropped out of a C-17 over there, and you can look south and see fighter aircraft,” said Charles Lennard, an air traffic control watch supervisor for the 96th Operations Support Squadron and retired 919th Special Operations Wing airspace manager. “There’s a lot of metal moving through the airspace, lots of things going boom, and lots of things [are dropped] out of the sky.”

Roughly one-third of traffic coming from the Eglin Reservation into Duke Field airspace is composed of 919th SOW aircraft and missions. The other two-thirds use the space for similar reasons. A north-south corridor running through the airspace provides close-access to training and drop zones in the Eglin Range, while offering an efficient route to the shoreline. Duke Field is also advantageous to training missions that rely on special lighting conditions.

“If we weren’t here to coordinate specific infrared and other lighting scenarios that this flight line facilitates, they’d have to take their aircraft to another airport with the same capabilities,” said Staff Sgt. Jacob Crabtree, air traffic controller with the 96th OSS. “I can’t think of another airport nearby that has these abilities.”

Duke Field has the advantage of being located in a rural setting, meaning with little to no ambient light pollution illuminating the flight line, unlike some of its’ urban counterparts. Air Force Special Operations Command, in particular, utilizes Duke Field because of its’ many low-light dependent training missions simulating austere environments.

“Any pattern known to any base is available here,” said Lennard. “We have various layouts with lighting and zones that allow for a wide variety of simulated training exercises.”

Air traffic flying through the Duke Field airspace relies on the 96th OSS in the control tower to manage and communicate with them. Controllers from the 96th OSS who manage airfield operations here warn pilots of weather, birds, and conflicting aircraft traffic. They also manipulate the lighting situation based on the training needs of the requester and communicate with other control towers and base facilities such as security forces and on-base fire services.

“Until there’s a perfect computer that can regulate all this, real air traffic controllers will be saving lives all over the world every day,” said Crabtree. “During hurricane season, it’s rewarding knowing that when you’re evacuating these aircraft that you’re potentially saving lives and metal.”

The Air Force Reserve’s total force partners at the 96th Test Wing help ensure the mission success of the 919th SOW by keeping the aircraft moving on and off the flightline. To learn more about how the unit operates with other agencies, be sure to follow the Wing on Facebook and Instagram.