MARCH 10, 2020 – The Defense Department continues to issue guidance to commanders and directors to combat the coronavirus outbreak, officials said in Washington today.

DOD is supporting the situation with the ocean liner Grand Princess docking on Oakland, California, with several people aboard having contracted the virus. DOD will provide four bases — Travis Air Force Base, California, Lackland Air Force Base, Texas; Miramar Marine Corps Air Station, California and Dobbins Air Reserve Base, Georgia — that will allow the Department of Health and Human Affairs to quarantine the passengers for 14 days, Salesses said.

Friedrichs said that right now the “the immediate risk to our force remains low.”

There have been a handful of cases in DOD around the world. “No one is seriously ill at this point and everyone has been diagnosed is being appropriately treated, getting the care that they need,” the doctor said. “So we have implemented a number of measures in order to make sure that people are appropriately identified and treated.”

As of this morning, there are seven people that officials suspect may have the virus and they are in the process of being tested. There are two more active duty personnel who are presumptive positives, Friedrichs said. This occurs when the first test is positive and officials are waiting for the results of a second test. Finally, there is an active duty service member in Korea who is unquestionably positive.

From the medical standpoint, the really important discussion now is to stress the appropriate mitigation measures to reduce the risk of more people becoming infected, the doctor said.

Keeping distance between people, wiping down workspaces, covering mouths when coughing or sneezing, “these are all the things that my mom told me years and years and years ago,” Friedrichs said. “She’s 84, she still tells me those now if I fail to remember them.”

The doctor said the common sense aspect of this mitigation is probably the most important aspect of the situation now. “These basic, unexciting, non-technical measures have significant impact on how rapidly this spreads,” he said.

The military is aggressively getting the word out about these measures. Defense Secretary Dr. Mark T. Esper took this to heart by having his regular senior leader meeting done via video-teleconference this morning rather than having everyone in one room, Jonathan Rath Hoffman, special assistant to the defense secretary for public affairs, said.

DOD will continue to do updates and will continue to issue guidance as more is known about the outbreak. “There have been questions on why do we keep putting more guidance out? I want to be very clear as a doc, it’s because as we learn more, and as we see where the outbreaks are, we’re trying to tailor it to give the best advice that we can to commanders and service members and their families,” Friedrichs said. 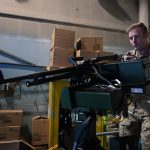