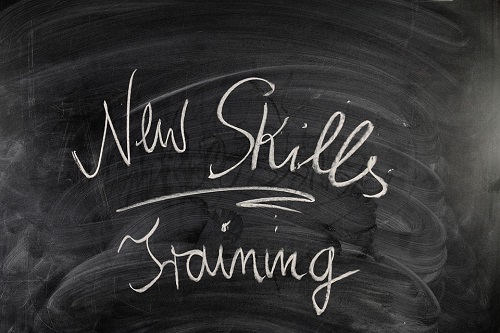 Under the framework of the Department of Defense SkillBridge program, eligible transitioning service members can participate in job skills training. The program is governed by DoD Directive 1322.29 — Job Training, Employment Skills Training, Apprenticeships, and Internships (JTEST-AI) for Eligible Service Members — and it states, “an eligible service member must complete at least 180 continuous days on active duty and is expected to be discharged or released from active duty, within 180 days of starting the JTEST-AI.”

Additionally, the service member must initiate their own participation and also have approval from the “first field grade commander authorized to impose non-judicial punishment under section 845 of Reference (a), also known as Article 15 of the Uniform Code of Military Justice (UCMJ), in the service member’s chain of command.”

Dix began the program in January in an internship provided by Bunker Labs in Chicago, and he completed his military service May 31.

“It’s a really good program that helps people like me and turns naval officers into really awesome ambassadors for the Navy and that experience,” Dix said.

In order to participate in the program, Dix was approved and recommended by Capt. John B. Vliet, TSC commanding officer, and Cmdr. Kathleen Milligan, TSC executive officer.

“I completely support the [Chief of Naval Operation’s] inclusion for the Navy’s participation in the DoD SkillBridge Voluntary Employment Skills Training Program; this was absolutely the right way to forge internship with my TSC naval officer, soon to enter the civilian sector,” Vliet said.

Dix said working for a startup health and tech company, as well as in corporate development allowed him to get a leg up on a career outside of the military while completing his active-duty tour.

“My network has grown exponentially over the last six months as a result of participating in this program,” he said. “That’s been really important, and I’m already seeing the benefits of that and I’m sure I will for a long time to come.”