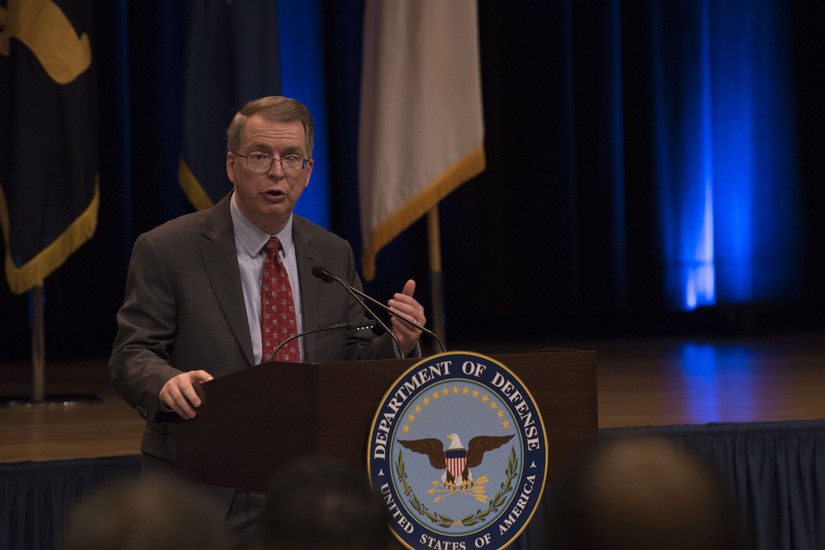 JULY 10, 2019 – The United States has not had a confirmed defense secretary since James N. Mattis stepped down at the end of 2018, but the chain of command remains uninterrupted during a vacancy in the permanent position, a senior Defense Department official said.

Eric Chewning, the chief of staff to the acting defense secretary, told reporters at the Pentagon today that continuity planning is a core competency for DOD, and the department has rehearsed and planned for a succession of the secretary under a number of different scenarios over the course of years.

Deputy Defense Secretary Patrick M. Shanahan served as the acting defense secretary when Mattis resigned, and President Donald J. Trump said he intended to nominate Shanahan for the job. But Shanahan stepped down due to family considerations last month, and the president appointed Army Secretary Dr. Mark T. Esper to serve as acting defense secretary. The president will nominate Esper for the permanent job, Chewning said, and that will trigger a series of steps.

“In each scenario, the planning ensures there is one person in charge of the Department of Defense with the authorities necessary to protect our homeland and defend America’s interests around the world,” he said.

This has included all the operational contingencies and worldwide planning and all the duties he will take on as the acting secretary, Chewning said.

The team that supports the defense secretary will remain in place to ensure continuity. This includes Marine Corps Gen. Joe Dunford, the chairman of the Joint Chiefs of Staff, and David L. Norquist, the defense undersecretary for financial planning and comptroller, who also is performing the duties of deputy defense secretary.

The process affects Norquist as well. Trump intends to nominate Norquist as deputy secretary, Chewning said, but will hold off on that until the results of the Esper nomination are known.

No one in the department is presuming Esper will be confirmed in the job — that is prerogative of the Senate, Chewning emphasized.

“We are working closely with the Senate leadership and the Senate Armed Services Committee, and we thank them for their efforts and commitment to swiftly consider top DOD leadership when they receive the formal nomination,” he said. “We will not presume formal confirmation, and it is the prerogative of the Senate to take as long as they think is necessary to examine and confirm a nominee.”