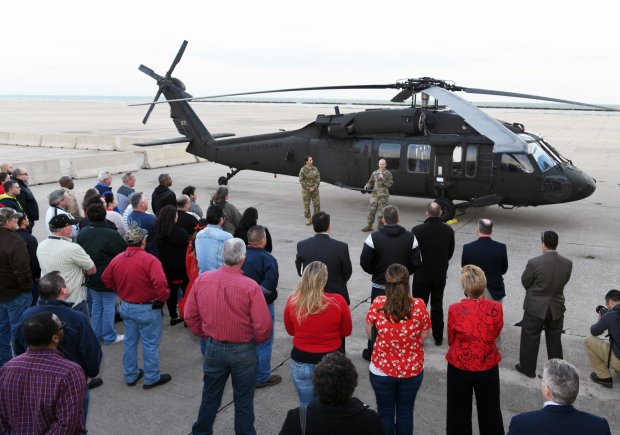 JANUARY 23, 2019, Corpus Christi, TX – In keeping with technological advancements and modernization, a Corpus Christi Army Depot (CCAD) Induction ceremony was held January 9 to mark the beginning of the newest upgrades to the UH-60 Black Hawk Helicopter.

According to Jackie Allen, industrial engineer, CCAD, the modernization process of the Lima-model helicopters is twofold: To introduce an affordable and relevant technological upgrades, and to improve the aviation community’s requirements for such a helicopter.

Specifics to the modification are focused on the cockpit and the electronic components within, said Don Dawson, director of aircraft production, CCAD.

“[Lima models] have an old analog dial instrumentation,” said Dawson. “What this [upgrade] does is gives [the Victor model] a full glass cockpit,” which is similar to the Mike model.

A glass cockpit is a digital suite that streamlines an enhanced management system allowing for better Pilot-Vehicle Interface – or PVI – added Allen.

Many advantages to a better PVI, include using a moving map, enhanced messaging between the pilots and commands, and the best navigation system available, which is part of an open system architecture, said Lt. Col. Andrew Duus, product manager, Program Executive Office, Aviation, Redstone Arsenal, Alabama.

“The open system architecture will significantly minimize the time getting new technology uploaded into the aircraft,” said Duus.

The upgrade goes further than implementing an infrastructure to improving pilot interaction and training efforts. Dawson said, the upgrade will “help the pilots with all the information flow coming to them … it synergizes the information and gives it to them in bite-size pieces.”

Additionally, the upgrade will help to train pilots, as most are learning on Mike models that are already equipped with the digital cockpit. “[The upgrade] will speed up the cost of training for new pilots, because they now can learn, essentially, one cockpit instead of two,” added Dawson.

The CCAD is prepared for this project, which is considered a “significant responsibility” given the depot’s position to produce such a “phenomenal helicopter for our [Army],” said Col. Gail Atkins, commander, Corpus Christi Army Depot.

Duus said he and PEO leadership are thankful for the Depot’s commitment to this project and are confident in the work they perform.

“The legacy and trust that has been established by [CCAD] is what has got us here … I look forward to working with all of you and harness the value you provide,” said Duus.

The U.S. Army has utilized the Black Hawk since the 1970s. They are offered in multiple airframe configurations, including the Alpha, Lima, Mike and Victor models, all used to provide air assault, general support, aeromedical evacuation, command and control, and special operations support to combat, stability and support operations.