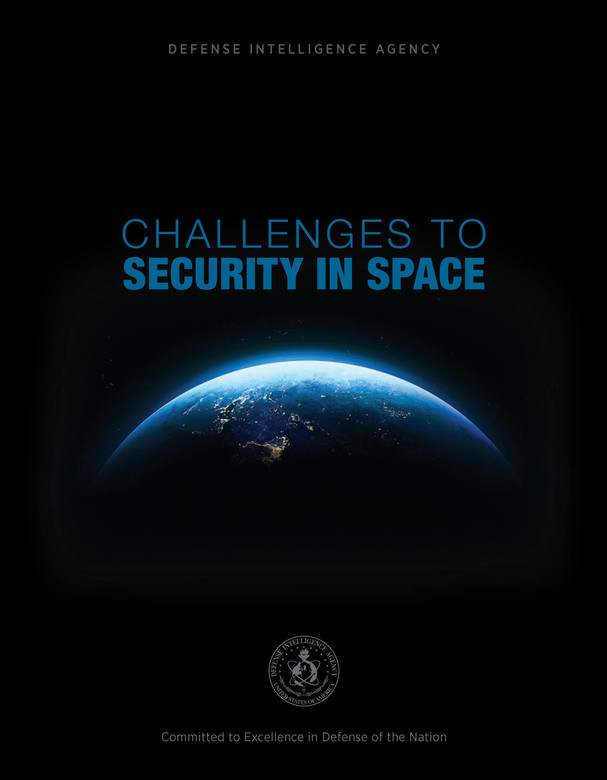 FEBRUARY 12, 2019 – Space enables the modern world, and the United States needs to maintain its progress in this critical domain if it hopes to lead in the future.

DIA officials spoke to reporters at the Pentagon this morning about the threats facing American dominance in space.

The unclassified report details the space and counterspace threats that pose a significant challenge the United States and its allies. It concentrates on the capabilities under development in China and Russia, but it doesn’t ignore the space threat posed by North Korea and Iran.

Space-based capabilities are key to all aspects of life in the United States. Space’s role in commercial and civilian applications is growing, and it is absolutely vital to employing the U.S. military, DIA officials noted.

Space-based capabilities are becoming more affordable and are technologically easier to build and deploy, and China and Russia are taking full advantage of this to eat into U.S. space dominance, officials said.

Russian, Chinese Capabilities
Russia and China have active counterspace programs. “Both countries have developed robust and capable space services, and these capabilities provide their militaries with the ability to command and control their forces worldwide, and with enhanced situational awareness enabling them to monitor, track and target U.S. and allied forces,” a senior DIA official said, speaking to reporters on background.

Both countries have established their own global positioning system satellite networks.

“Chinese and Russian doctrine indicate that they view space as important to modern warfare and view counterspace capabilities as a means to reduce U.S. and allied effectiveness,” the senior official said. “China views space superiority as part of the ability to control the information sphere and that is a key component of modern warfare.” Russia sees space as a warfighting domain, and winning the battle in orbit will be decisive in future warfare, the official said.

China and Russia have developed counterspace capabilities, including ground-based missiles aimed at satellites, jamming of signals to or from satellites, ground-based directed energy weapons, kinetic-kill vehicles, space-based counters and more. “Both China and Russia reorganized their militaries in 2015, emphasizing the importance of space operations,” the official said. China established a strategic support force to integrate its space, cyberspace and electronic capabilities.

The United States has the most operational satellites, followed by China and then Russia. This United States lead is a challenge to Russia and China, and DIA officials said they expect they will continue to develop counters to American capabilities.

One threat is a result of the successes in space. “As the number of satellites grows, so does the threats posed by space debris,” the official said. “That makes tracking satellites and discriminating satellites from threats and nonthreats and predicting and preventing collisions more challenging.”

Space Affects Daily Life
The report is aimed at education; the public needs to understand all that space brings to the United States, its allies and the world at large, said a senior Defense Department official, speaking on background.

When Americans think of space, they think of NASA and space exploration, but they do not necessarily think of all that space brings to their daily lives, the DOD official said. The application on a hand-held device that gives directions, calls rideshare car or locates a lost package is enabled by the GPS constellation operated by the U.S. Air Force.

“Space is fundamental to U.S. prosperity,” the Pentagon official said. “The United States harnesses the benefits of space for communications, financial transactions, public safety, weather, agriculture, navigation and more. Additionally, there is a wave of exciting commercial technologies and investments in space that are expanding the potential opportunities, the benefits we can all enjoy.”

Space has had a profound impact on the military, the official added, allowing American service members to anticipate threats, respond to crises and to project power globally with fewer troops deployed and less collateral damage.