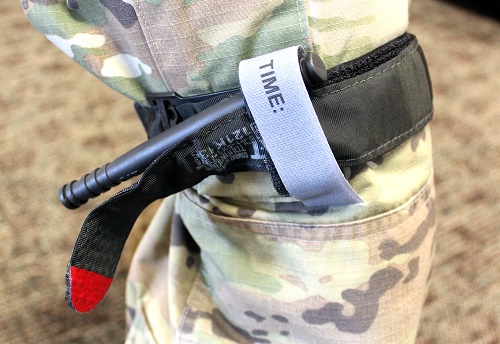 OCTOBER 12, 2016, FORT DETRICK, MD – Makers of the Combat Application Tourniquet™ have updated the design of the widely used tourniquet.

The update has resulted in two different versions of the tourniquet currently in use in the field, though both have the same national stock number (NSN 6515-01-521-7976). Deployed Soldiers may soon receive the updated version and wonder how to use it.

“When you need to actually use a tourniquet is the wrong time to figure out which version you have and how to use it,” advised Jason Harrington, Army Medical Materiel Agency’s nurse consultant with the Medical Devices Program Management Office

“Soldiers need to look at their tourniquets and become familiar with the version they have been issued by carefully reading the printed instructions that come with each CAT.”

The older version of the tourniquet, “Generation 6,” is the non-pneumatic CAT, which was developed through research at the Army Medical Research and Materiel Command. It’s a small, lightweight tourniquet designed to completely stop arterial blood flow from an injured limb.

Exsanguination (i.e. bleeding to death) is the most common cause of potentially survivable death for wounded Warfighters. So every Soldier carries a CAT on the battlefield to provide life-saving care to themselves or a fellow Soldier.

The update version of the CAT, “Generation 7,” features a single-routing buckle through which Soldiers feed the tourniquet belt before tightening it with the windlass (a textured black rod).

The “Generation 6” CAT model has two slots on the buckle and could be used to either double-route (buddy care) or single-route (self-care) the belt.

While the updated CAT single-slot buckle is designed for faster and easier application, the Army emphasizes that both models are effective.

“Soldiers who have an older version should not feel they have to replace their device by getting the newer version or fear that the older version is any less effective,” Harrington said.

Both have been tested by the Army Medical Research Materiel Command’s Institute of Surgical Research and the Navy. Additionally, Army medics are now trained on both versions.

Harrington recommends keeping the instructions for reference and refresher training.

Additionally, the new model’s lot number and “G7” are visible on the device and through the manufacturer’s packaging.