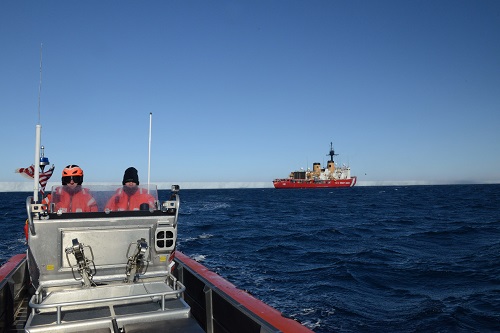 March 3, 2016, by Petty Officer 2nd Class Grant DeVuyst – The Coast Guard Cutter Polar Star crew pulled in their mooring lines and left Seattle over three months ago, as winter descended on their homeport.

Through the Pacific Ocean, days turned into weeks and weeks into months. The icebreaker crossed into the Southern Hemisphere on a hot December day under the equatorial sun. Over the course of a month, summer faded into the perpetual chill of the Antarctic.

Thousands of miles from their origin, the cutter reached its destination: the fast ice of McMurdo Sound. It’s the first trip south for much of the crew, but for others this place is familiar. The mission, Operation Deep Freeze, predates even the 40-year-old cutter. Their task is a crucial portion of the overall military support to the National Science Foundation-managed U.S. Antarctic Program, one of the nation’s most unique peacetime missions.

The first step in understanding the Polar Star’s relationship with Antarctica is a look at the continent itself. In the totality of human history, Antarctica’s chapter has barely begun. Even the earliest expeditions of the frozen landmass are only now reaching their 200th anniversaries; even less for the U.S. Navy, whose first visit was in 1839.

Then followed the continent’s “Golden Years,” the “Heroic Age” of Antarctic exploration, when men like Mawson, Scott, Amundsen, and Shackleton earned their historical significance, enduring years of immeasurable hardship in the name of exploration, discovery, and scientific advancement.

Only two decades later, in 1929, the legendary Adm. Richard E. Byrd cemented his name in polar history while exploring and establishing outposts on Antarctica, as well as conducting the first flight over the South Pole.

The U.S. military’s role in Antarctic discovery was more specifically defined during the Cold War. In 1959 the Antarctic Treaty System set aside national territorial claims and designated the continent as a place for peaceful uses, including a sanctuary for scientific research and ecological conservation. For 57 years now the treaty has stood, resulting in unprecedented international and interagency cooperation for science and discovery.

Twenty years after the initial treaty, the newly christened Polar Star became a player in an already thriving mission to support scientific operations at the bottom of the world.

“For 40 years the Polar Star has been fulfilling the mission down here,” said Capt. Matthew Walker, commanding officer, Polar Star. “We operate in the most remote region on Earth; the windiest, coldest, highest, driest place on Earth.”

This year, the Polar Star reached a frozen McMurdo Sound on Jan. 7, 2016. The National Science Foundation’s station sat 13 miles to the south with ice upwards of five feet thick in between. Breaking in to NSF’s McMurdo Station takes weeks of effort, ultimately resulting in a navigable route from open water to the pier.

With the combined 75,000 horsepower of the Polar Star’s turbines, the cutter makes gradual but substantial progress on the channel. It’s difficult to imagine the smaller, less powerful, WWII-era Coast Guard Cutter Eastwind doing the same job in 1956 during the first Operation Deep Freeze (though it’s worth mentioning they had help from a half dozen Navy ships).

Exactly 60 years ago the freight vessels they escorted brought in the makings of a new science station. Today’s shipments keep the station running through a dark, brutal winter.

McMurdo Station, Antarctica’s largest research station, is the logistical hub for the U.S. Antarctic Program, serving as a jumping off place for science conducted elsewhere in the continent as well as housing the largest laboratory in Antarctica, the Albert P. Crary Science and Engineering Center.

McMurdo, one of three year-round stations NSF operates in Antarctica under a Presidential mandate, also is the staging area for all the fuel and supplies needed to keep the Program’s Amundsen-Scott South Pole Station, at the geographic pole, in operation.

Home to roughly 900 people during the Southern Hemisphere’s summer, McMurdo is the world’s southernmost seaport; home to airfields that accommodate ski-equipped Hercules military transport planes and smaller aircraft; and a heliport from which helicopters transport research teams to sites such as the ice-free McMurdo Dry Valleys across McMurdo Sound.

Before the yawning darkness of another winter creeps into the Antarctic, the Polar Star and its crew will journey home to Seattle to make vital repairs on the aging ship. Equipment rattles loose or cracks under the strain of icebreaking and requires annual repair. The cutter will enter a dry dock period to prepare for another patrol the following November.