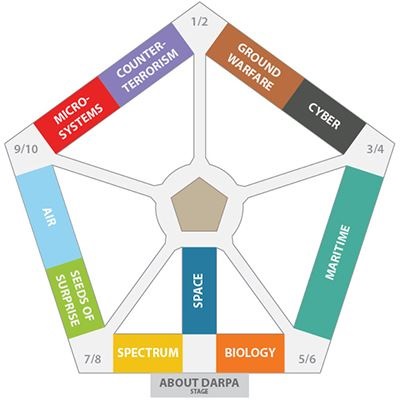 For nearly six decades, DARPA has played a pivotal role in DoD’s science and technology community and in the larger U.S. technology ecosystem, to pursue challenging but potentially paradigm-shifting technologies in support of national security.

— Some whose products are already being adopted by the military services and are making a difference for warfighters;

— Some that are advancing through the technological frontier that separates the seemingly impossible from the doable; and

— Some that are in the earliest phases of development, but whose potential to radically change the technological and security landscape is so great that they’re already influencing the department’s strategic thinking.

“DARPA Demo Day is our chance to demonstrate the collective energy that not only propels DARPA but also invigorates people across the wide community with which we work — defense companies large and small, commercial startups and major firms, universities, government agencies and labs, and our close partners across DoD,” DARPA Director Arati Prabhakar said in a statement.

Prabhakar added, “It is a team that revels in the opportunity to attack pressing, nearly intractable problems — all in the context of public service.”

Just as past investments in DARPA helped to secure the nation by repeatedly bending the arc of technological history, Prabhakar said, so today’s investments will give rise to capabilities that will protect the United States and project its interests for decades to come.

Range of Technologies and Scientific Domains

These include dimensional scales from the atomic to the celestial, time scales from attoseconds to decades, spectral scales from radio waves to infrared to gamma rays, and, in its most recently created technical office, biological scales from genes and proteins to neurons and organs to infectious diseases and global health.

— Cyber: Protecting the data behind critical decisions through automated cyber-defense systems, hack-resistant software and networks, and real-time visualization of cyberspace.

— Ground Warfare: Exerting control on the ground through manned and unmanned systems that bolster squad-level capabilities such as reach, situational awareness and maneuverability.