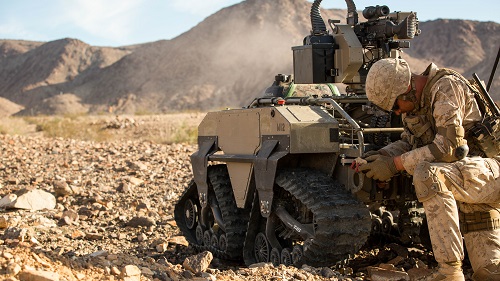 NOVEMBER 10, 2016, MARINE CORPS AIR GROUND COMBAT CENTER TWENTYNINE PALMS, Calif. – Marines with 3rd Battalion, 5th Marine Regiment, from Marine Corps Base Camp Pendleton, California, are putting their own spin on Marine Corps Air Ground Combat Center’s Integrated Training Exercise. The 28-day exercise is currently the longest-lasting training evolution that occurs at the installation and involves a series of progressive live-fire exercises that assess the ability and adaptability of a force of more than 3,500 Marines and sailors.

As announced in All Marine Corps Activities 024/16 Sea Dragon 2025, the 37th Commandant of the Marine Corps, Gen. Robert B. Neller, has designated the battalion as the Marine Corps’ experimental force. According to the ALMAR, the battalion is being reconfigured, re-equipped, and will receive additional training as it progresses through its preparation for deployment, which places a unique twist on this iteration of ITX.

“Overall, what we are trying to do is inform the future organization and equipping of the GCE, specifically the rifle battalion,” said Lt. Col. Donald Wright, field testing branch head, Marine Corps Warfighting Laboratory. “What’s different about this ITX is that [the battalion is] organized a little bit differently, and they’re using some emerging technology.”

Traditionally, the Marine Corps rifle squad is composed of 12 Marines and a squad leader. According to Wright, the battalion’s rifle companies are putting new standards to the test with one company experimenting with 10-Marine squads and another with 14, while the remaining company serves as the controlling factor with the original configuration. Tactical Training Exercise Control Group’s Coyotes, the Combat Center’s exercise controllers, are responsible for evaluating and providing feedback on each company’s performance.

Emerging technology plays a large role in this ITX, with rifle squads having hands-on experimental vehicles as well as unmanned aerial surveillance and ground robotics systems. Marines are using one such vehicle, the Multi-Utility Tactical Transport, or MUTT, for both enhanced logistics capabilities, in transporting ammo and other supplies, and in a weaponized variant, with mounted heavy weapon systems.

“The Marines are adapting very well,” said Wright. “Some of the technology they just received when they got out here, so they are not fully trained on it but it’s very obvious they have the right attitude. 3/5 is doing everything they can to integrate this technology because they believe in it and they believe it will enhance their operability.”

Wright described these experiments as an ongoing effort “to increase the infantry battalion’s competitive advantage.” Sea Dragon 2025 highlights a three-phase process consisting of exploration, refinement and validation prior to establishment of new Marine Corps-wide doctrine. This enables the unit to serve as the catalyst in testing emerging concepts and weeding them down to only the most practical applications in future warfighting.