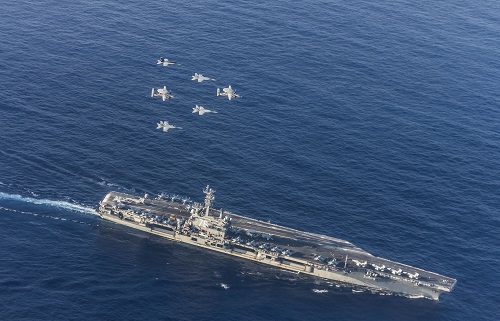 The AMI is an inspection conducted every two years for each squadron in the U.S. Navy and U.S. Marine Corps to evaluate the effectiveness of the squadron’s maintenance program practices and adherence to Naval Aviation Maintenance Program guidance.

After two days of inspections and contingency response drills while embarked aboard aircraft carrier USS Ronald Reagan (CVN 76), the Dambusters’ preparation and attention to detail earned the squadron a score of 99.8 percent on the inspection, ranking the squadron’s Maintenance Department as the number one maintenance program out of the last 100 inspected.

“Our success on the inspection was truly a team effort and can be attributed to all of our program managers’ engagement with inspectors, their knowledge of individual programs, and the efforts they have made over the past year to improve everything they control,” said Lt. Cmdr. Collier C. Crouch, Dambusters maintenance officer.

During the inspection, individual programs within an aviation command can be given three different grades based off their efficiency and effectiveness during the inspection process — “On-Track,” “Off-Track,” or “Needs More Attention.” The inspection team evaluated a total of 41 programs from the Dambusters and graded them all as On-Track.

“This year’s result is a testament to the spirit of teamwork resident year-round in Carrier Air Wing (CVW) 5,” said Cmdr. Guy Snodgrass, commanding officer of VFA-195. “Although our result reflects the hard work, dedication, and relentless pursuit of excellence demonstrated by each Dambusters Sailor, our ability to zero-in during final preparations [was] made possible by squadrons who passed along their best practices and AMI lessons learned following each day’s meeting with the inspection team. This enabled our Sailors to incorporate the most relevant inspection guidance, an opportunity only made possible by the spirit of cooperation and camaraderie found throughout CVW 5.”

The maintenance team will continue to self-evaluate and critique their performance to ensure the lessons learned from this year’s AMI are carried forward during their time embarked aboard Ronald Reagan, and their time as a forward-deployed squadron to Atsugi, Japan.

The Dambusters of VFA-195 are forward-deployed to CVW-5, operating more than 10 F/A-18E Super Hornet strike-fighter aircraft.

VFA-195 is currently embarked aboard Ronald Reagan supporting security and stability in the Indo-Asia-Pacific region.