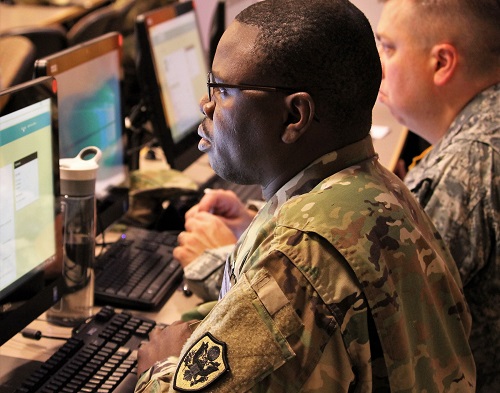 The Cyber X-Games, hosted by the Army Reserve Cyber Operations Group (ARCOG), 335th SC (T), is a five-day exercise focusing on advanced areas of cyber security training. Cyber X-Games leads into the Cyber Endeavour conference taking place at CMU, June 20-22. Cyber Endeavor is the Department of Defense-sponsored conference for military and civilian practitioners from across government, industry, and academia to address the nexus of cyberspace and national security, as described on the conference website.

Attendees at Cyber X-Games 2017 will be challenged in areas of Cyber detection, response, and recovery. A competitive environment will be created with live red/blue teaming, evaluation by facilitators during strategy briefings and cyber mission exercise scenarios. Quizzes and status updates for each team are also part of the five-day challenge, according to coordinators of the event.

The exercise is conducted at an advanced level, said Michel, who is also a student in the computer science program at The Citadel, the Military College of South Carolina.

“Coming to the Cyber X-games has allowed me to collaborate with people both military and civilian, experienced in different backgrounds of cyber security,” said Michel.

Sgt. Nicholas Malone, currently assigned to the North Central Cyber Protection Center, also under command of the ARCOG, and a cyber defensive team leader for the X-Games, explained there are more varied aspects at this event compared to last year.

“Last year’s event was a response to preset items, as with this year, attendees are challenged with a full spectrum of items,” said Malone.

He also shared how challengers on the team are given a choice of spending time for offensive versus defensive cyber operations.

Working on the scenarios this time around afforded the opportunity to change the mission planning to focus more on managing team assets and strengths in response to the game challenges, said Malone.

Working with the Department of Defense network to make the games possible is an enjoyable experience, said Whisnant.

“Interacting with the DoD in developing the Cyber X-Games allows me to help in a practical way rather than providing academic research for guidance material,” she said.

Creating the Cyber X-Games for military personnel allows them to apply what they know, but learn in a safe environment about the areas that are most challenging to them in cybersecurity, she said.

The ARCOG, a newly reflagged brigade-sized cyber unit, was created from the Army Reserve Information Operations Command in October 2016. The ARCOG is in the process of building its force through readiness and advanced cyber security training to perform cyber missions in support of the 335th SC (T) and U.S. Army Cyber Command.