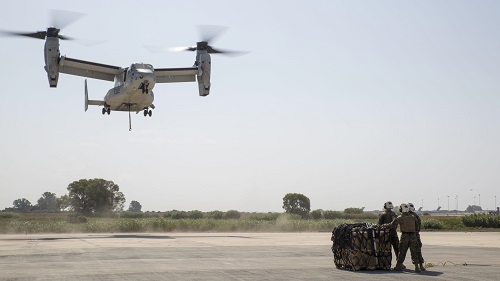 “We went out there with [Marine Medium Tiltrotor Squadron 263] and we provided external support to them so they could conduct their lift requirements,” said Sgt. Christopher Dutzer, helicopter support team leader with the Combat Logistics Battalion 2, Special Purpose Marine Air-Ground Task Force-Crisis Response-Africa.

The training served as a refresher for the HST Marines and MV-22B Osprey crew as they practiced attaching and transporting a pallet of Meals, Ready to Eat from a single-point sling suspended from the belly of the aircraft.

“Part of our [training and readiness] standards and overall support of logistics is facilitating external lifts like that,” said Dutzer. “We provide logistics support, in this case transporting cargo, supplies, ammunition, anything that you could imagine can be transported externally via heavy lift helicopter and it can be moved into a location that vehicles can’t necessarily go.”

External lift training prepares the Marines to efficiently attach cargo to the aircraft and helps qualify air crew in the mission-essential task of rapid insertion and extraction in a possible crisis response scenario.

“[The training] went flawlessly,” said Dutzer. “We had some phenomenal piloting and their crew chiefs were on point with their guidance as well and the landing support specialists did their job to their utmost abilities. I was very impressed and proud of them.”