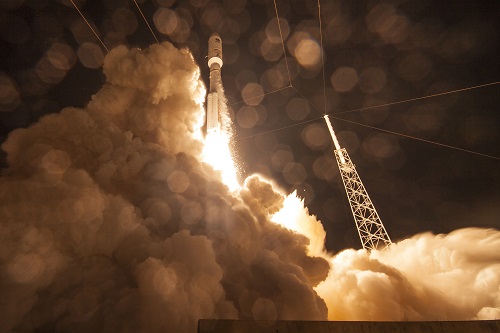 A live launch broadcast will begin at 10:10 a.m. EDT and will be viewable as an online webcast at http://www.ulalaunch.com.

In partnership with the Air Force Space and Missile Systems Center and the 45th Space Wing, the Navy Communications Satellite Program Office (PMW 146) is prepared to launch the MUOS-5 satellite, an on-orbit spare that will complete the five-satellite constellation. MUOS provides improved secure satellite communications around the world via an Internet Protocol-based system, equipping tactical and mobile warfighters with cell phone-like capabilities such as crystal-clear voice quality, excellent call completion rates and the ability to use voice and data simultaneously.

MUOS is operational today, supporting unrestricted operations via the satellites’ legacy payloads that provide ultra-high frequency satellite communications for the DoD and mitigate potential gaps in UHF communications capabilities. The system’s wideband code division multiple access (WCDMA) capability has been demonstrated through exercises with warfighters on terminal platforms from the Army, Air Force, Coast Guard and Navy–to include troops on the move, C-17 aircraft in flight, Coast Guard vessels in the north and south polar regions and the Navy’s OE-538 submarine antenna.

“As legacy communications systems continue to age, we recognize the imperative to continue maturing MUOS WCDMA and support terminal development, testing, certification and fielding efforts to deliver end-to-end MUOS WCDMA capability,” said Jarratt Mowery, director of end-to-end system testing. “As we move forward with continued testing and training, our end-users will have opportunities to assess and provide recommendations for improving the system–helping us ultimately deliver MUOS WCDMA capabilities to the warfighters as quickly and effectively as possible.”

The first four MUOS satellites are in their operational slots and providing legacy communications capability from their geosynchronous orbits. The MUOS constellation and associated network will extend narrowband communications availability well past 2025.