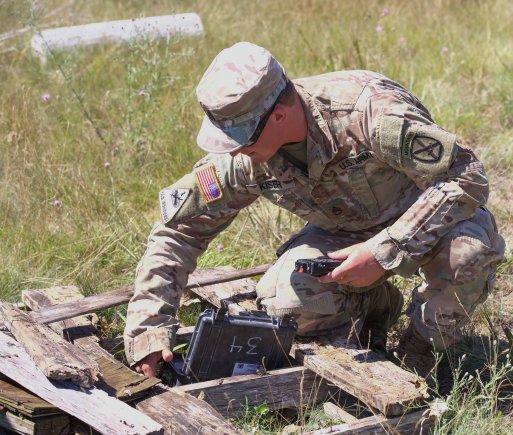 JULY 20, 2018, Fort Drum, NY – The Improvised Explosive Device, or IED, is a well-known threat to service members operating in potentially hostile environments like Afghanistan and Iraq.

This weapon has inflicted a destructive toll since Operation Enduring Freedom, but 1st Brigade Combat Team, 10th Mountain Division (LI) aims to combat this menace by teaching the Company Crew Specialist Course at Fort Drum’s Home Station Training Center. The course emphasizes the use of Soldier awareness and tech gear like the THOR III to defeat IEDs.

“1st Brigade is the most deployed combat unit in the world,” said course instructor Staff Sgt. Matthew Kiser, an electronic warfare specialist with 10th Brigade Support Battalion, 1st Brigade Combat Team. “To be at that level requires us to move freely on the battlefield. Knowing you can stop an IED before you see it is a real confidence builder.”

Many IED’s placed by terrorists can be set off using a simple cell phone signal or radio transmission. That’s where the THOR III comes in. It can neutralize radio-controlled improvised explosive devices, or RC-IEDs, and disrupt enemy communications on the battlefield.

The course also includes lessons against vehicle-borne IED’s, or VBIED, as well as command wire IED’s. Command wire IED’s require a person to push the detonation button from a relatively close distance. In those instances THOR disrupts cell-phone and radio signals, meaning enemies can’t communicate troop movements and locations to other members of their group.

During the course, Soldiers also operate as a mock Explosive Ordnance Disposal squad that patrols roads while marking or clearing simulated IED’s.

“Everybody should have the basic knowledge of this equipment,” said Pfc. Cheyanne Claspill, a motor transport operator with 10th Brigade Support Battalion, 1st Brigade Combat Team. “I’ve never deployed, so I’ve never seen this equipment before. I never knew we could disrupt signals to IED’s. This training makes me feel confident that we can improve Soldiers’ safety.”

The lessons learned here will be sent to the Joint Readiness Training Center at Fort Polk, as well other Department of Defense training operations and forward deployed missions where Soldiers’ lives depend on it.

The 1st Brigade Combat Team prides itself on being “Ready Now,” and also staying “Relevant Tomorrow.” Instructional, hands on courses like the Company Crew Specialist Course keeps Soldiers informed, confident, and best of all, safe.