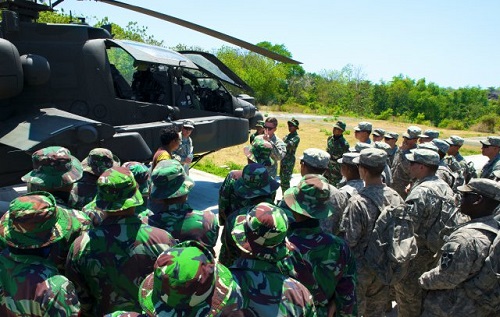 WASHINGTON (Army News Service, April 20, 2016) – This summer, for the first time, a Pacific Pathways iteration will involve bringing nations from the Pacific region to the United States to engage in exercises Tiger Balm, Arctic Anvil, and Rising Thunder.

“We now have ‘reverse Pathways,'” said Lt. Gen. Stephen Lanza, who serves as commander of I Corps at Joint Base Lewis-McChord, Washington. “So now we have countries coming to train with us at home station.”

During Pacific Pathways 16-3, for instance, Singaporeans will come to Hawaii for Tiger Balm in July, he said. Canadians will go to Alaska for Arctic Anvil, also in July. And the Japanese will go to Washington State for Rising Thunder in September.

Pacific Pathways kicked off its first iteration in 2014, putting existing exercises with partner nations in the Pacific region under one banner and converting them from independent stand-alone exercises into a series of single, lengthy operations, each of which requires more participants, at more levels of command, to practice and demonstrate a much broader set of skills and capabilities than would normally be required during a single, stand-alone exercise.

Lanza characterizes Pacific Pathways as an operation that includes multiple units participating in multiple exercises over several months. A Pacific Pathways iteration, he said, is more valuable to participants than the sum of the exercises it includes — which independently were aimed at building relationships and the tactical skills of those involved.

A Pathways operation is more than a unit moving from the United States to one nation, and then home again. Instead, a participating unit deploys from the United States to another nation, then to another nation, and then possibly to another nation as well, over the course of several months. They bring their gear and equipment with them, then move into and out of a nation’s ports, and conduct reception, staging, onward-movement and integration operations. They must understand port operations, frequency management, requirements for live fire, and how to move ammunition from the port to the training area.

“All of those things have to be worked through,” Lanza said.

On top of that, the level of command to conduct a Pacific Pathways operation is deeper than what would be required for a single exercise, he said.

“We are also executing mission command, our ability to command and control at multiple echelons,” he said. “From the theater all the way down to the tactical unit, we have expeditionary mission command — and we also tie this back to the Army Operating Concept.”

Lanza said that during a Pacific Pathways iteration, units might be training in Indonesia and Malaysia, while the command post is in the Philippines.

The breadth of what Pacific Pathways provides enriches participant experience and greatly enhances the ability for the entirety of I Corps to train, all the way up to corps level. It has pushed the value of individual exercises beyond development of familiarity between partner nations, Lanza said.

“What we found from Pathways is that every echelon of readiness has increased. We build readiness at home station, as we do more training at home station now because of our Decisive Action Training Environment rotations. We’ve added complexity to our home-station training; we’ve added changing conditions to home station. And then we take that readiness we built at home station and the combat training centers, and we have additive readiness that is built during that Pathway, not just from the training we do in the countries, but for the entire operation.”

I Corps is already training with Guard and Reserve forces at home station, at the Joint Readiness Training Center and at the National Training Center, as well as on Pacific Pathways operations.

But now, as part of the Army’s recently-announces “Associated Units” pilot program, a formal relationship has been established between regular Army units and reserve-component units. As part of that pilot program, three Guard and Reserve units will be partnered with three units under I Corps:

A conference in May, at U.S. Army Forces Command, will work out exactly how those relationships will happen, but Lanza said he imagines “we’re going to train together, we’ll have training guidance, we’ll have exchanges of officers and capabilities. But we will train together; the question will be how we are going to do that. So anytime you can get the Guard and Reserve and active component to train together, you optimize the time they do have to train, and it optimizes our ability to build that relationship.”

Will that associated Guard or Reserve unit necessarily deploy with the active unit to a combat zone? Lanza said he thinks so, but that and other questions will be worked out in May at FORSCOM.

“I think this initiative to associate Guard and Reserve units with active units, that we train together and build readiness together, is exactly what’s needed for the future,” he said.

Gen. Dalbir Singh, who serves as chief of staff of India’s army, recently toured the Army inside the United States, and during that trip, he visited JBLM to meet with Lanza.

“I Corps has benefited from USARPAC’s growing relationship with the Indian Army,” said Lanza. “Our Soldiers routinely conduct military-to-military engagements which achieve consistent progress and build readiness in both forces. Exercises such as Yudh Ahbyas and Varja Prahar foremost build personal relationships and trust with our partners which then makes for a more professional force in both armies. We have a lot of experiences to share and more opportunities for partnership will benefit our two countries as well as the Indo-Asia-Pacific region.”

Lanza said I Corps is looking forward to increased partnerships with India in the Pacific. One example is the desire to expand the Yudh Ahbyas exercise with India. In 2015, that exercise was held for the first time inside the United States at JBLM. About 150 soldiers from the Indian army came to the U.S. to participate. He said the Americans and Indians have a lot to learn from each other in such exercises.

“I think as we do this with the Indians, it’s more than just tactical training,” he said. “We’re building relationships with them where we’re sharing lessons learned. There is a lot we can learn from the Indians on counter-terrorism and counter-insurgency operations.”

“We pick up a lot of how the Indians operate in those different environments,” he said. “When those Mountain Soldiers came to train with us from their 9th Division, they were exceptionally well trained, exceptionally disciplined and motivated. We learned a lot from them.”

Lanza said the Indian Army is interested also in lessons the U.S. learned during operations in Iraq and Afghanistan. They are also interested, he said, in U.S. weapons systems, including M777 Howitzers, and Apache helicopters, “they are looking at our capabilities to see where they can leverage that,” he said.

Developing further relationships with India, the largest democracy in the world by population, Lanza said, is critical to security in the Pacific.