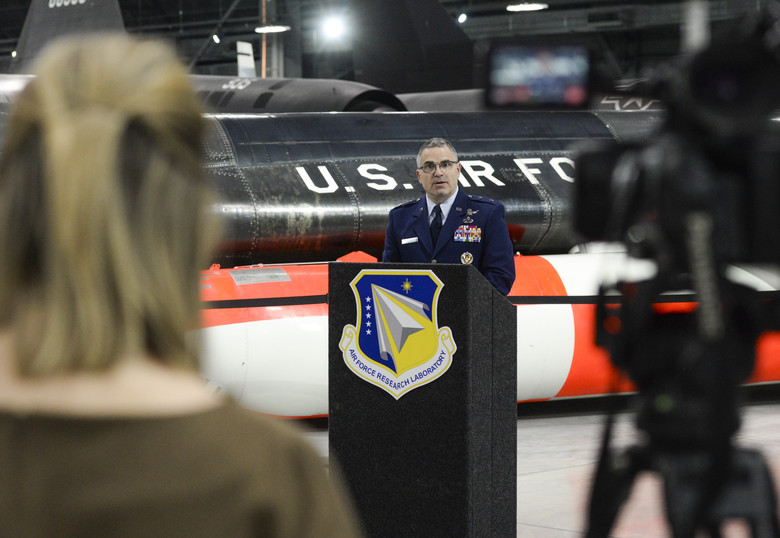 APRIL 29, 2019 – The commander of the Air Force Research Laboratory presented highlights of the new Air Force Science and Technology Strategy for 2030 and beyond to members of the local media April 18 at the National Museum of the U.S. Air Force.

Speaking in front of several experimental aircraft on display that implemented technologies developed at AFRL, Maj. Gen. William Cooley told reporters that the new strategy prioritizes demands on time, space and complexity in future conflicts across all domains. The strategy aligns with the National Security Strategy and the National Defense Strategy and lays out a path forward for the Air Force Science and Technology ecosystem to deliver warfighting capabilities at the speed of relevance and necessity.

AFRL collected over 1,500 ideas from academia, industry and government during the 18 months the strategy was being developed that address the “what” and the “how” of the strategy.

“We believe that bringing a stronger voice for science and technology across the Air Force will help us achieve the objectives laid out in this strategy,” Cooley said of the objective to appoint an Air Force Chief Technology Officer.

Speaking on the third objective, Cooley said there are two key components to this objective – the first being AFRL’s internal workforce.

“We must continue to attract, develop and retain the best and brightest from across the United States and our allies. This will require extra effort to partner with universities and technology ecosystems to enhance and expand our bench of researchers.”

The second component is to continue and expand AFRL partnerships with other stakeholders in the science and technology ecosystem, which includes universities, industry, both large and small businesses, other defense laboratories and other government laboratories.

“We also recognize that we need to be easier to work with and connect with, so to do this, we are implementing what we call a ‘front door’ to better enable partnerships – www.afresearchlab.com, a new website that will act as our digital front door,” he said.

One of the things the lab needs to do better is to engage small businesses who are not aware of the needs of the Air Force, and yet have terrific ideas that can help the Air Force and the national security enterprise.