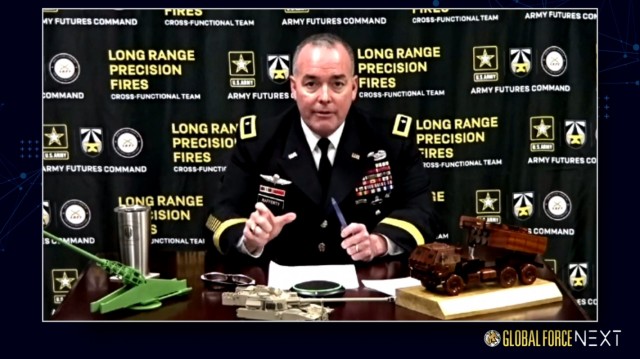 APRIL 8, 2021 – After Project Convergence started as an idea, the series of exercises first held last year are now a mature experimentation path for the Army’s modernization efforts, such as long-range precision fires, an Army Futures Command leader said last month.

The initiative, which is slated to take place again this fall, has provided an architectural framework to accelerate multi-domain operations and to keep pace with technological innovation, said Brig. Gen. John Rafferty, director of the LRPF Cross-Functional Team.

“Project Convergence is the way we put this thing into context … and figuring out how we’re going to fight and win in the future,” Rafferty said March 17 during the Global Force Next symposium.

During the project’s first iteration in August and September, the Army attempted to reduce the time needed to identify and hit targets using sensors in space, in the sky and on the ground. The service fused its assets with joint capabilities during the exercises.

The Army must combine its assets with other services in order to keep pace with its peer adversaries, China and Russia, which have modernized their forces, Rafferty said.

“We are driven as a team by the pacing threat. It’s real, it’s a great power competition,” Rafferty said. “And there isn’t a moment to lose when it comes to providing these game-changing capabilities to our Soldiers in the field.”

Rafferty said that the Army has adopted a “combined arms” mindset for each of the Army’s eight cross-functional teams, which will be critical to maintaining overmatch with near-peer threats. He added that Project Convergence will help the Army combine its joint capabilities across multiple domains.

“Figuring out how we’re going to fight with these systems as a combined arms team is critical,” Rafferty said. “It’s going to help us be more efficient, move faster, and put the right technologies and the right capabilities in the hands of our Soldiers at the right time.”

The Army plans to field a long-range hypersonic weapon capable of flying at five times the speed of sound by 2023. The Army Hypersonic Project Office has worked with industry to develop the hypersonic glide body. The Army and the Navy have been working together to develop a hypersonic capability that will provide a combination of range, maneuverability and speed.

Equipment including the first training canisters for the first prototype battery has been delivered to Soldiers to help prepare and train them for the long-range precision fires capability earlier this month, said Bob Strider, deputy director of the Army Hypersonic Project Office.

He added that launchers and a battery operations center will be delivered by the end of September. The unit receiving the weapons cannot be identified for security reasons, he said.

“If you look at the adversary capabilities in terms of intercepts and in terms of acquisition, it leads you to believe that you need a variety of hypersonic, supersonic and subsonic weapons,” Strider said. “You need different volume, different flight paths, and different attack angles in order to defeat and penetrate the anti-access, area denial systems.”

Additionally the Army has been testing its Extended Range Cannon Artillery, or ERCA, which it plans to field to a field artillery battalion by 2023. Army engineers at the Picatinny Arsenal in New Jersey have developed a faster autoloader that they tested in December. The Army tested ERCA during its Project Convergence demonstrations last year.

The autoloader could boost lethality significantly by enabling the cannon to fire at faster rates. It could also potentially pave the way for a minimal or unmanned firing option in the future.

Rafferty said that the service has also been synchronizing the delivery of ammunition with the cannon in order to have a comprehensive, yearlong assessment. During that evaluation, Soldiers will provide real-time feedback to engineers who are working on the battalion set, Rafferty added.

“If you want to go fast, you’re going to have to find ways to be efficient, because you can’t skip steps,” Rafferty said “You can compress activity and you can do things in a simultaneous fashion.”

“Everything that we’re developing from the tactical system up to the strategic is focused on fighting and winning in the Pacific,” Rafferty said.