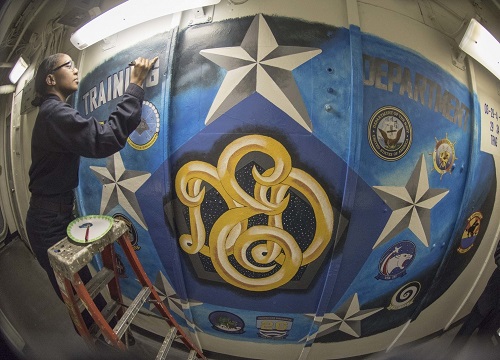 MARCH 20, 2017, ATLANTIC OCEAN (NNS) – A long-lasting tradition in the Navy is to color over the gray and decorate bulkheads with colorful artwork that expresses pride in the ship the artist is attached to.

There is no rating and no specialty which trains or mandates these works of art, but instead a motivated hobbyist to step up to the deckplate.

“I’ve always painted as a hobby,” said Yeoman 3rd Class Aline Nordelus, from Miami, who currently works as an administrative clerk in the commanding officer’s administrative division. “I started in middle school when I realized I really loved painting. My art teacher actually got me a scholarship to a private art high school in southern Florida, but my parents couldn’t afford for me to go. Instead, I went to regular public high school where I continued to paint.”

Nordelus enlisted in the Navy to pursue greater career opportunities and began her tour aboard Ike as an undesignated deck seaman. Besides painting bulkheads haze gray, her talent remained only a hobby until the door to apply it opened.

“My leading petty officer at the time addressed the division and asked, ‘Who knows how to paint?'” Nordelus said. “I was never that enthusiastic about the boatswain’s mate job — like tying knots and mooring lines — as I’ve always liked the administrative side more, but when he asked I thought ‘This is my in!'”

Her first painting was on a door to one of deck department’s offices. The executive officer personally complimented her, and she earned a whole new responsibility. In the following months, she painted many other doors, the ship’s rat guards, the wildcats and a mural in the forecastle, in addition to many other pieces throughout the ship.

“I painted most of my time in deck department,” said Nordelus. “I want to give them a shoutout for letting me do what I love so much.”

Deck department granted her a short hiatus which gave her time to strike into the yeoman rating, where she quickly advanced to E-4. Her reputation as an expert artist remained, however, and she’s been called on once again to apply her trade.

To balance her new schedule as a yeoman, she often worked after hours and late into the night to finish her painting. She thanked training department for being patient with her other responsibilities, and how they often supported her while she worked. After nearly four months of work, she finally applied the finishing touches last night.

“This will probably be my last project on the ship,” Nordelus said. “I want to focus on studying for my next advancement exam and transferring.”

Her latest work can be seen near training department’s classrooms. When Nordelus finally transfers to her shore command, she hopes to continue her hobby in the private sector.