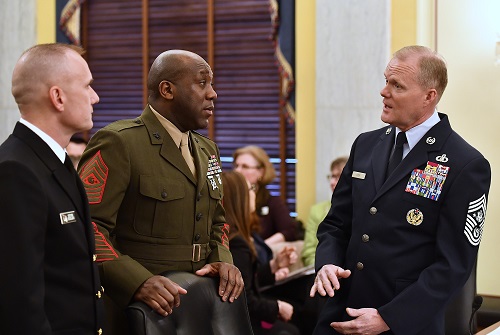 FEBRUARY 15, 2017, WASHINGTON (AFNS) – Chief Master Sgt. of the Air Force James A. Cody testified on the importance of Airmen and their families before the Senate Armed Services Subcommittee on Personnel Feb. 14 on Capitol Hill.

“It is imperative we put them first, inspire them and support them as they face the challenges inherent to serving the profession of arms,” he said. “It’s not an easy task, which is why focusing on our Airmen and their families is so important.”

The modern landscape is unpredictable and requires the Air Force to constantly improve recruitment and retention of talent, while continuing to explore opportunities to strengthen the force.

“To meet global demands, resource emerging requirements and repair and sustain the force, the Air Force must increase our active-duty strength up to 321,000 by the end of 2017, and up to 350,000 over the next seven years,” he said. “To do this, we must address mission and readiness demands, increase our accessions and strengthen our retention, while never sacrificing quality for quantity.”

Families are often the catalyst to an Airman’s decision to stay or leave the Air Force.

“These selfless families make many sacrifices and the Air Force remains clear in its commitment to them,” Cody said. “Our Airman and Family Readiness Centers serve as a crucial bridge with our families and military missions, encompassing 14 core programs to ensure resiliency and readiness of Airmen and their families.”

“This is certainly a key factor today as our nation continues to face fiscal uncertainty, which has already eaten at an Airman’s compensation,” he said.

The Air Force continues to educate Airmen on the newest program, the Blended Retirement System, to ensure Airmen are prepared to make educated financial decisions. He said the Air Force is also developing comprehensive financial training across the military lifecycle.

Cody mentioned the benefits of the Defense Department’s Spouse Education and Career Opportunity Program, which provides education and career guidance to military spouses worldwide. More must be done, Cody said, pointing out spouses with careers that require recertification they have to pay for after every move.

He then discussed the recent Spouse and Family Forum conducted by the secretary of the Air Force and chief of staff of the Air Force, showing leadership commitment to addressing the issues spouses brought up, including support for exceptional family members, spouse employment, schools and deployments.

Cody then switched topics to focus on single Airmen resilience, which impacts readiness. He cited the Air Force’s Single Airman Program Initiative as one example of how the Air Force seeks to revitalize squadrons and optimize Airmen performance.

The chief master sergeant of the Air Force, who retires Friday, also touched on the need and improvement on programs to allow a military license or certification to easily transition into its civilian sector equivalent so that Airmen separating or retiring would have a smooth transition into civilian employment.

“The talented men and women of the Air Force are called upon each day to perform crucial missions around the world,” Cody said. “In every one of those mission areas, Airmen are the key to our success. Taking care of those Airmen must always be our first priority; every one of them earn their current pay and compensation.”