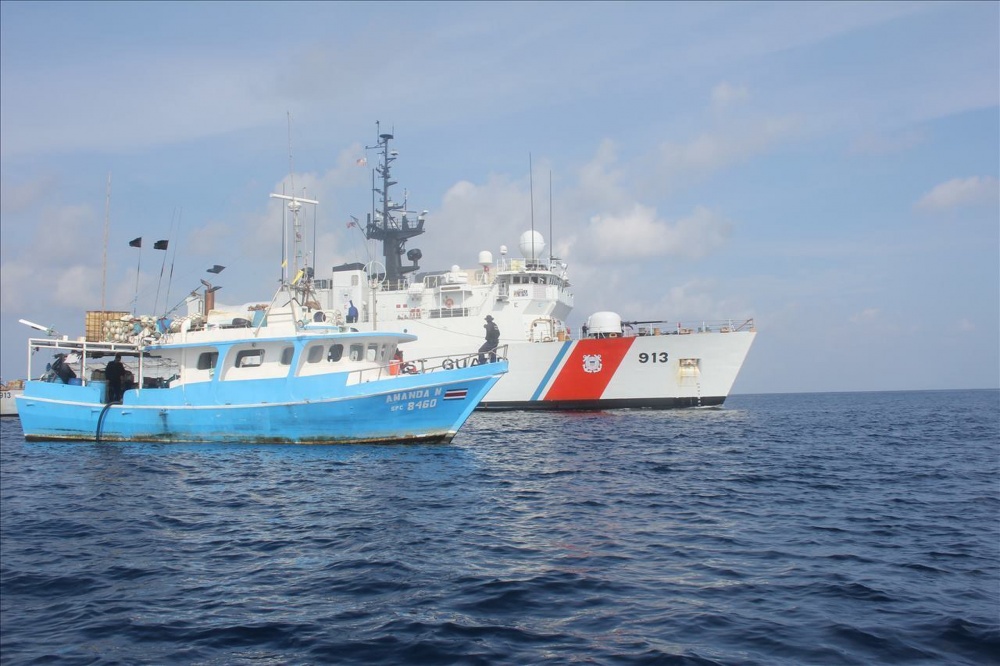 APRIL 14, 2020 – The U.S. Coast Guard and Costa Rican authorities seized approximately 1,700 pounds of cocaine Thursday with an estimated value of more than $29 million from a fishing boat in international waters of the Pacific Ocean off Central America.

The Coast Guard cutter’s small boat arrived on scene with the fishing vessel, Amanda M, homeported in Costa Rica, with four suspected smugglers and received authorization to board the vessel.

Coast Guard members discovered several false compartments throughout the fishing boat, where they were able to uncover 1,700 pounds of cocaine by Thursday morning.

“This interdiction is a great example of what we can accomplish with strong international partners,” said Rear Adm. Peter Gautier, the 11th Coast Guard District commander. “Our Coast Guard crews performed an exhaustive boarding and search of Amanda M, recovering $29 million worth of cocaine. Our Costa Rican partners played a major role in the success of this operation which will disrupt criminal networks in the region during this major surge.”

On April 1, U.S. Southern Command began enhanced counter-narcotics operations in the Western Hemisphere to disrupt the flow of drugs in support of Presidential National Security Objectives. Numerous U.S. agencies from the Departments of Defense, Justice and Homeland Security cooperated in the effort to combat transnational organized crime. The Coast Guard, Navy, Customs and Border Protection, FBI, Drug Enforcement Administration, and Immigration and Customs Enforcement, along with allied and international partner agencies, play a role in counter-drug operations.

The fight against drug cartels in the Eastern Pacific Ocean requires unity of effort in all phases from detection, monitoring and interdictions, to criminal prosecutions by international partners and U.S. Attorneys in districts across the nation. The law enforcement phase of counter-smuggling operations in the Eastern Pacific Ocean is conducted under the authority of the 11th Coast Guard District, headquartered in Alameda. The interdictions, including the actual boardings, are led and conducted by members of the U.S. Coast Guard.