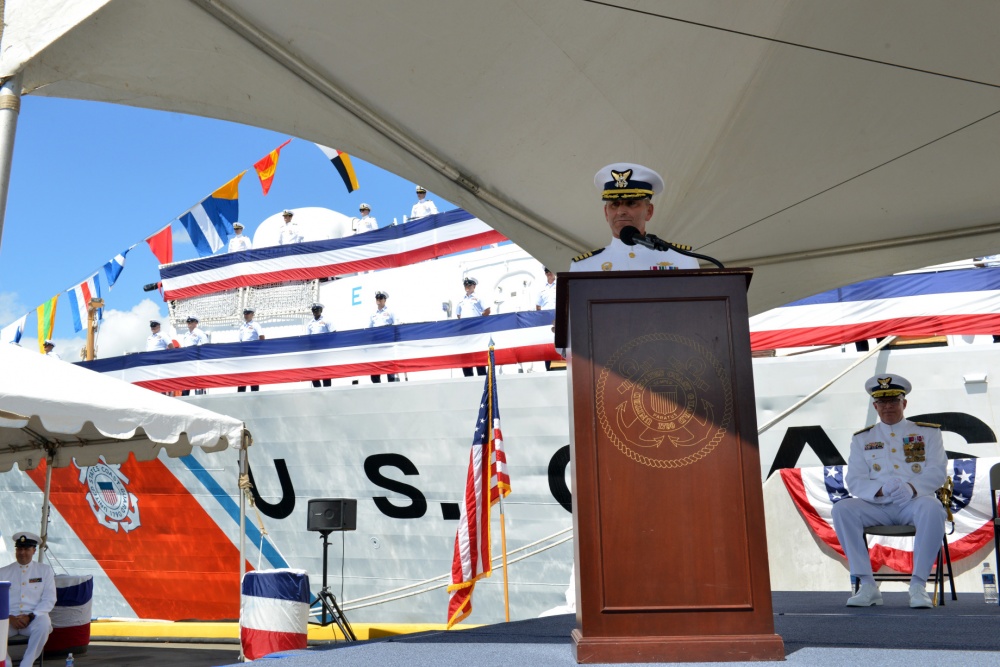 MARCH 30, 2018, Honolulu, HI — The Coast Guard decommissioned its ninth High Endurance Cutter after nearly 50 years of service as part of recapitalization efforts during a ceremony at Coast Guard Base Honolulu, Thursday.

“The crewmembers who’ve served aboard Sherman have contributed immensely to protecting the American public across Sherman’s nearly 50 years of meritorious service while changing the course of history through the cutter’s combat action in Vietnam and a record-setting drug seizure,” said Vice Adm. Fred Midgette, who leads the service’s Pacific fleet as the commander of Coast Guard Pacific Area in Alameda, California. “The Coast Guard remains committed to protecting the American public, our security and our economic interests wherever we are called upon to serve. Recapitalizing our vessels, aircraft, boats, and infrastructure is mission critical and our highest priority to ensure we remain ‘always ready’ to continue protecting our nation.”

In March 2007, a boarding team dispatched from Sherman discovered seventeen metric tons of cocaine on a Panamanian flagged freighter, Gatun. This seizure remains the largest individual drug bust in U.S. history with an estimated street value of $600 million. As the record holder, Sherman proudly wears the Golden Snowflake.

Sherman is one of a few Coast Guard cutters to circumnavigate the world. The Sherman crewmembers accomplished this in 2001 after conducting U.N. sanctions enforcement duty in the Persian Gulf and goodwill projects in Madagascar, South Africa and Cape Verde.

“The Sherman has served above and beyond the cutter’s intended capabilities across her nearly half-century long service to our country,” said Midgette. “Though Sherman has sailed her final patrol for the Coast Guard, a long and rich legacy has been left behind and the missions and commitment to our country will be continued by the men and women aboard future National Security Cutters who will carry the torch into the future.”