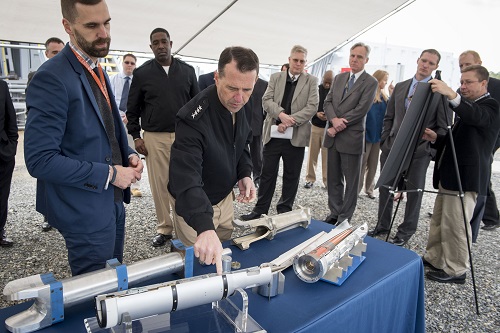 Upon arrival, the CNO spoke to more than 900 Sailors, government civilians, and defense contractors attending his early morning all-hands call in person or via live-stream video.

“What brings you here is a sense of mission, a sense of doing something important and the nobility of that cause,” said Richardson. “Let’s make sure we preserve those attributes. It helps us maintain our competitive edge.”

Richardson discussed Navy policies and plans impacting the fleet and answered questions, including queries related to the emerging technologies he would see during his tour of NSWCDD laboratories and facilities.

“I will sign the Navy Leader Development Framework next week,” said Richardson, regarding his strategy to provide a common framework for comprehensive and enduring leader development across all Navy communities. “It will be available online and I encourage you and your folks to read it. We’re committed to improve the way we develop our entire Navy team, Sailors and civilians.”

While on tour, he turned his attention to understanding the science and engineering challenges involved with new and emerging technologies.

Specifically, Richardson saw electric weapons — electromagnetic railgun launcher, hypervelocity projectile, and the high-energy laser — in addition to the battle management system. He was briefed on the latest technological advancements and observed a laser weapon demonstration.

The hypervelocity projectile is a next-generation, guided projectile capable of completing multiple missions for gun systems such as the Navy 5-inch, 155mm, and future railguns.

Ponce Sailors — trained by the Dahlgren team on the Laser Weapon System’s operation — reported the weapon performed flawlessly during testing in the Arabian Gulf, including tests conducted in adverse weather conditions of high winds, heat, and humidity.

NSWCDD scientists and engineers also updated Richardson on the command’s complex warfare systems development and integration capabilities, and their efforts to incorporate electric weapons technology into existing and future platforms.

Moreover, NSWCDD cyber engineers briefed the CNO on USS Secure — a multi-enclave test environment to enable the Navy’s development, evaluation, and testing of cybersecurity concepts and technologies to defend mission critical systems at sea and ashore.

The CNO is the senior military officer of the Department of the Navy. He is a four-star admiral and is responsible to the secretary of the Navy for the command, utilization of resources, and operating efficiency of the operating forces of the Navy and of the Navy shore activities assigned by the secretary.

NSWCDD, a Naval Sea Systems Command (NAVSEA) warfare center division, is a premier research and development center which serves as a specialty site for weapon system integration. The command’s unique ability to rapidly introduce new technology into complex warfighting systems is based on its longstanding competencies in science and technology, research and development, and test and evaluation.