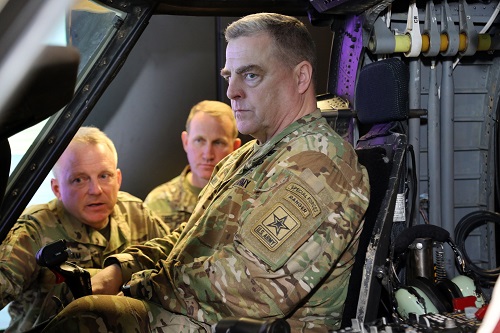 APRIL 19, 2017, REDSTONE ARSENAL, Ala. – Chief of Staff of the Army Gen. Mark A. Milley visited Army Materiel Command equities at Redstone Arsenal and Anniston Army Depot April 17 to learn more about the command’s critical link to Soldiers on the battlefield.

In his second visit to the arsenal since assuming the role of the Army’s most senior uniformed officer in August 2015, Milley acknowledged the significant impact the Army Materiel Command and tenants of Redstone Arsenal have on Army readiness.

“While far from the front lines, both Redstone Arsenal and Anniston Army Depot are directly linked to the battlefield,” Milley said. “Army Materiel Command has an enormous mission to provide materiel readiness and ensure we remain the best-equipped fighting force in the world.”

“First and foremost, Army Materiel Command is synchronized in support of Army priorities and combatant command requirements,” Perna said. “We are focused on how we support and project our force in these challenging times and how we ensure our efforts are directly linked to the Soldier on the battlefield.”

Two of the three technologies — the Multi-Mission Launcher and the UH 60V Blackhawk transition — highlighted decreases in acquisition time and cost, and the potential for increased workload to the Army’s organic industrial base. The third technology — the Universal Mission Simulator — is already impacting Soldier readiness, with 70 fielded systems across the Army and four to the U.S. Marine Corps.

Following his tour of technologies at AMRDEC, Milley met with Army Materiel Command leaders for a roundtable discussion on strategic and operational readiness, sustainment and the command’s role in the development and support of the future force.

“Depots like Anniston provide an incredible capability to our Army that is absolutely critical to sustain,” Milley said. “From the skilled artisans at Anniston to the scientists and engineers at AMRDEC, Army Materiel Command’s vast and diverse mission cannot be understated or replicated.”

By AMC and AMRDEC Public Affairs