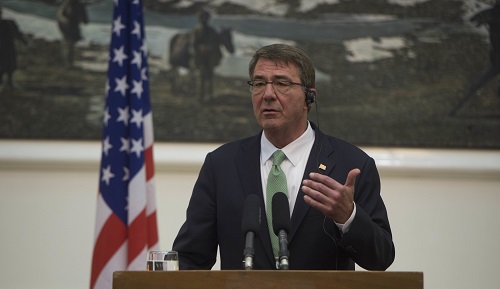 WASHINGTON, July 13, 2016 – Defense Secretary Ash Carter discussed three major decisions that the United States has made regarding Afghanistan during a news conference yesterday in the Afghan capital of Kabul.

Appearing with Afghan President Ashraf Ghani, Carter noted that his third visit to Afghanistan as defense secretary gave him the opportunity to discuss with Afghan leaders the U.S. commitments “to enhance the authorities of our ground commanders, … to maintain our financial commitment to the Afghan security forces, and third, to retain a more substantial U.S. force presence into 2017.”

Carter told reporters that a productive day of meetings with Ghani and Chief Executive Abdullah Abdullah, as well as with Afghanistan’s defense and interior ministers, “reaffirmed to me that we have strong partners here, with a common vision focused on a secure and prosperous future for the Afghan people.”

At last week’s NATO summit in Warsaw, Poland, Carter noted, coalition partners “confirmed their commitment of financial sustainment to Afghan forces and the continuation of the Resolute Support Mission.”

Afghan Forces ‘Continue to Step Up’

Carter said Afghan forces, now in their second year providing security lead for their own nation, have demonstrated motivation, will and resilience in the face of a persistent enemy. “I commend them for fighting courageously last year during a tough fighting season, and for their continued dedication in the face of formidable challenges this year,” he said.

Every day, Carter said, nearly 320,000 Afghan soldiers and police “are serving and fighting courageously.” The secretary said “far too many” members of Afghanistan’s security forces have paid the ultimate price and that he and Ghani stand together “in honoring their sacrifices.”

As Afghan forces move further into the lead, Carter said, “we are looking to build on their successes to find ways to support and enable them more effectively.” Maintaining U.S. force levels in Afghanistan at 8,400 troops will enhance the United States’ progress in its two central missions in Afghanistan: training, advising and assisting Afghan forces and supporting counterterrorism operations, he added.

Carter said he and the U.S. commander in Afghanistan, Army Gen. John W. “Mick” Nicholson Jr., discussed President Barack Obama’s recent decision to grant additional flexibility in the use of forces. “This added flexibility, coupled with new integration of the A29 and MD530 close air support platforms, reflects our determination to seize every opportunity possible to use our resources in theater to the greatest possible effect,” the secretary said.

Carter noted that when Ghani visited the Pentagon in March 2015, the Afghan president thanked U.S. service members and their families for their sacrifices. Carter, in his turn, had a message for the Afghan people, “who have put themselves at risk and sacrificed so much to bring us to this point of promise, potential and strength. We’re with you. We stand by you. And we will continue to work hard together to finish the mission we started.”

The defense secretary also thanked Nicholson and NATO partners, as well as American, NATO and Afghan troops “who have served and sacrificed together over the past 15 years in the name of peace, security and freedom, and who continue that mission today.”

Carter visited Afghanistan as part of an overseas trip that began at the NATO summit and also included a visit to Iraq. 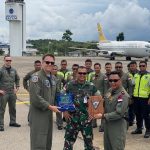