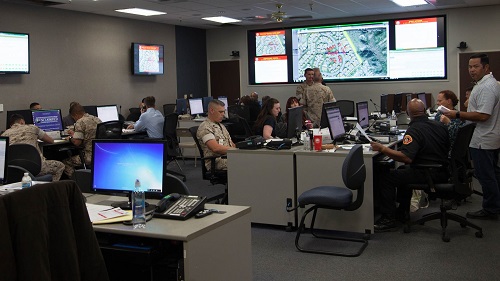 Exercise Citadel Rumble is an integrated disaster response and recovery exercise for emergency response plans, polices, and procedures as they pertain to an all-hazards event.

“The exercise is important because it provides ongoing training to enable the readiness of the installation and its command and control capabilities in both man-made and natural disaster scenarios,” said John M. Carretti, deputy assistant chief of staff, G-3/5 on base.

The scenario encompassed a notional 6.8 magnitude earthquake that occurred in Southern California, along with structural damage, gas leaks, and fires.

“The simulated issues that we have here range from things such as catastrophic damage to infrastructure, including pipelines roads, power lines, buildings, life support facilities and also how we are affected off-base by crises within the different communities, ”said Tim Bleidistel, senior watch officer with the emergency operations center, MCI-West.

The scenario was designed to enhance command and control procedures as well as interoperability between the various commands involved.

“We uncover points of friction,” said Bleidistel. “As we encounter them, we work through a logical progression, provide solutions, and then put these in our After Action Report. This allows us to refine our procedures,” said Bleidistel.

Many of the participants brought the experience they had dealing with real events on base, such as the recent Roblar Fire on July 21 to the exercise.

“This exercise was conducted within a few weeks of the Roblar Fire enabling us to go into it with a warm start,” said Carretti. “The staff brought their experience from this and built on lessons learned during the exercise.”