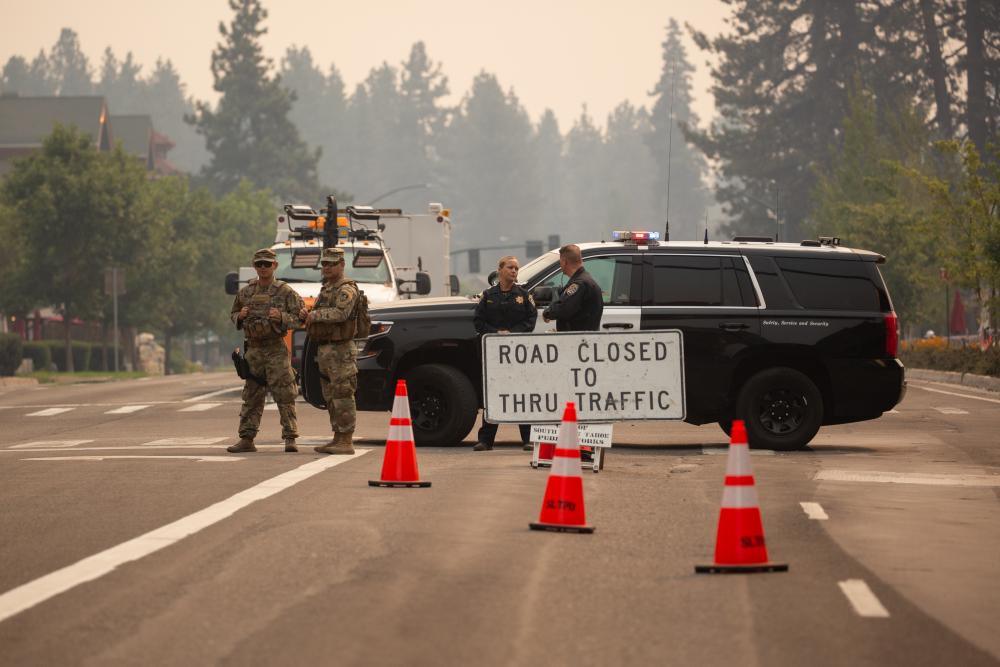 SEPTEMBER 3, 2021 – Raymundo Morales can’t remember how many fires he’s worked or what their names were.

This week, he’s adding another one to the list: Caldor.

Morales is one of 150 military police activated this week by the California Army National Guard to support the California Highway Patrol as the Caldor Fire continues its march across the Sierra Nevada mountain range.

His unit, the 270th Military Police Company, is based in Sacramento, but over the years they’ve activated for fires all over the state, Morales said.

On Wednesday, Morales and a partner worked a traffic control point with the CHP along U.S. Route 50 at the crossroads where California and Nevada meet.

The intersection is one of several hard closures enacted by the CHP since residents evacuated the South Lake Tahoe area Monday.

“There are no ins and outs unless you have the proper credentials,” said CHP Officer Ruth Loehr, a public information officer who works in the South Lake Tahoe area within the patrol’s Valley Division.

The lakeside resort town of about 22,000 residents typically bustles with casino-driven tourist traffic, but on Wednesday it was eerily empty, she said.

“This is definitely very unusual for Lake Tahoe and South Lake Tahoe,” Loehr said. “This place is normally packed full of people. We generally have tourists everywhere and locals alike because this is very much a community where we all work together, live together and play together.”

Loehr, who is displaced from her office due to the evacuations, said tensions in the area are high, but help from partner agencies brings peace of mind.

“Having any extra help in our closures has been beneficial due to the fact that people are really on edge right now,” Loehr said.

For locals, the Caldor Fire evokes memories of another fire that ripped through the area in 2007, she said.

The Angora Fire started in the Lake Tahoe Basin and destroyed more than 250 homes in the South Lake Tahoe area. Gusty winds drove the 3,100 acre blaze across its path of destruction.

“Angora came through and basically did the same thing,” Loehr said. “It was get out and get out now.”

National Guard support at checkpoints helps with manpower, she said, but it also brings reassurance to the community.

People are “very stressed out with the situation, as we all are,” Loehr said. “It really helps to give them peace of mind when they’re coming through and seeing allies out there.”

As a traditional National Guard Soldier who also works a civilian job, Morales was in the middle of his shift as a prison corrections officer Monday when the 270th was activated. He changed uniforms and headed for Sacramento.

At the traffic control point Wednesday afternoon, Morales estimated a couple hundred cars passed through the intersection since his shift began that morning. The town was quiet, but his patch of concrete was busy.

“Right now we’re seeing people mainly from the fire department coming in and out, and we’re seeing all types of law enforcement from different agencies,” Morales said.

He and his partner saw pedestrian traffic too.

“Homeless are coming up to us and asking, ‘hey, where are the buses at,’ and we always point right down there,” Morales said gesturing to a nearby casino where buses are helping evacuate anyone who needs it.

When he enlisted as a military policeman, Morales didn’t know he’d work wildfires.

“I knew we’d do some type of military police work, but I didn’t know it would be to this compass,” he said. “Not a lot of people can say that they’ve been to this fire or worked on that fire, and I can say I’ve worked the Camp Fire, the Carr Fire, now I can say I worked on this fire as well.”

At the end of the day, he’s just happy to help.

“It’s good that we always go to them,” Morales said. “To be able to sit here and help CHP and all the other agencies, we’re just doing our job.”

The Caldor Fire began Aug. 14 and has burned 210,000 acres to date. More than 845 structures are destroyed and another 54 are damaged.

On Wednesday, the fire received a presidential emergency declaration to supplement state, local and tribal government emergency services for the protection of lives, property, public health and safety.