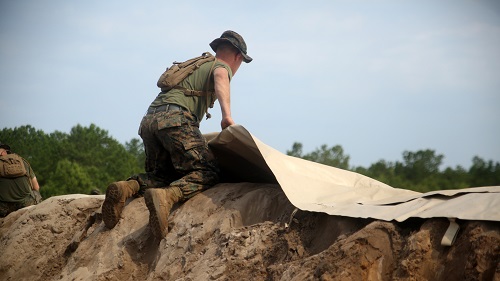 “We are here setting up a full AAFS,” said Chief Warrant Officer 2 Claudia Schultz, the executive officer of Bulk Fuel Company. “We are not actually putting or running any water or fuel through it. We are setting it up dry to see how long it will take.”

This exercise was the first time the company built a fuel system this large.

“Our company actually has not done a full AAFS, so this is a first for our Marines,” added Schultz. “It is a new experience and hopefully they take a lot from it.”

The unit was not only inexperienced with this mission but they also faced the challenge of completing this task with a minimal amount of equipment at their disposal.

“We had six trucks, two bulldozers, and two trams, when most units would need an entire motor transportation lot in order to complete this mission,” said Sgt. Cody R. Poole, the unit’s assistant operations chief. “But we made up for it with an ample amount of personnel to get the job done.”

The company challenged the 100 plus Marines participating to complete the exercise in a total of 72 hours.

“The time we were hoping to get was 72 hours,” said Poole. “We completed it in 54 hours and 27 minutes. I think the Marines did [really] well and did a really good job of doing what they needed to do and far-exceeded our expectations.”

With this experience under the Marines belts, the unit is much more confident for any missions they will be tasked with in the future.

“A lot of [Marines] don’t think about how the fuel is going to get there,” said Schultz. “They just think when we get there the fuel will be there. It takes a lot of work and equipment to set this up and I hope the Marines know this is valuable training.”