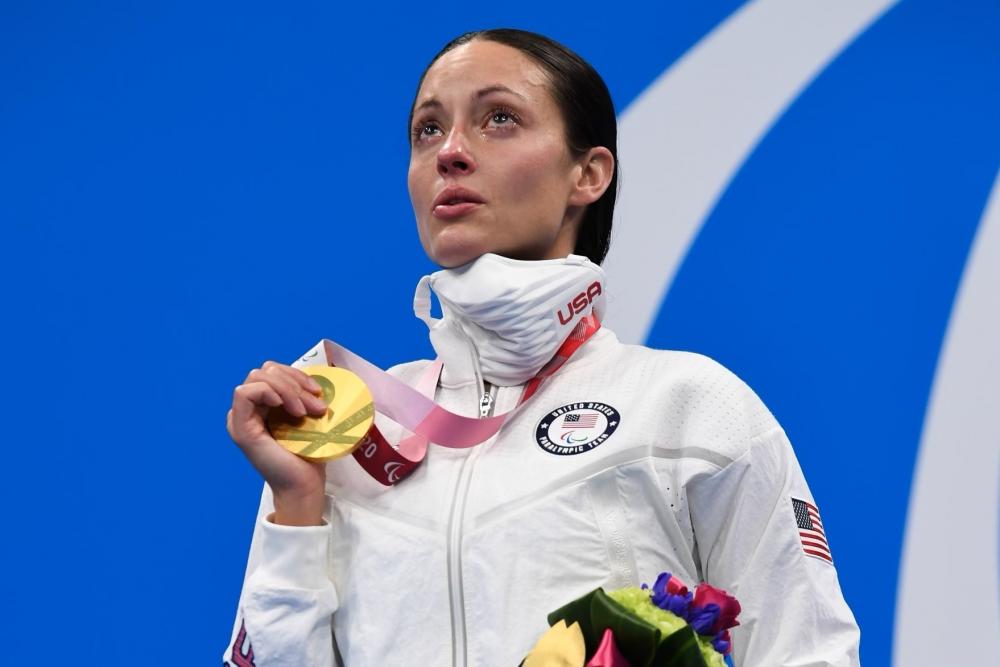 “I felt grateful,” said Marks when she found out she won gold in her final race. “I think having so many of my brothers and sisters in the military on the front of my mind, and pushing me, really helped me in the water.”

Marks, who said she has been trying to get her 100-meter backstroke under a time of 1:20 for a while, is a Soldier in the U.S. Army’s World Class Athlete Program. During the medal ceremony, where Marks was awarded gold, she became emotional.

“A lot was going through my mind,” said the nine-time Military World Games medalist. “Everything has been exceptionally turbulent. So many people are in pain right now and seeing the American flag raised for a positive reason meant a lot.”

Marks swam in the S6 and SM6 classification. In the Paralympics, athletes are given classifications based on their sport and level of disability. For example, S6, means “S” for freestyle, butterfly, and backstroke events, and “6” for physical impartment. Classifications include physical, visual, and intellectual impairments.

“I really enjoyed every race,” said Marks, a four-time Invictus Games medalist. “My goal was to give the military community something to cheer for and to look forward to. I hope I accomplished that.”

During her 50-meter butterfly race, Marks swam alongside Great Britain Paralympian Ellie Robinson. Marks mentioned one of her favorite moments from the Games was speaking to Robinson after the race.

“She told me it was her last race ever and that she was retiring due to medical issues,” said Marks, a Pat Tillman ESPY award winner. “I got to give her my bear (given to athletes who medal). It was a special memory. She is a very talented S6 swimmer.”

Tokyo is Marks’ second Paralympic Games appearance. She made her debut in Rio 2016 where she won gold in the 100-meter breaststroke after setting a new world record of 1:28.13, and bronze in the 4×100-meter medley.

“This experience was very different. I just tried to be grateful and be in the moment as much as possible,” said Marks, an Army Women’s Hall of Fame inductee. “I didn’t let it overwhelm me. I got to appreciate being there.”

As long as it brings her joy, and she can use it to honor her fellow service members, Marks will keep on swimming.

“I have received so much overwhelming support from my husband, WCAP, and military family,” said Marks, the Army’s first Paralympic swimmer. “I want them to know its 80% their support and 20% my swimming that has gotten me to this point.”

To learn more about WCAP, visit the website (www.armywcap.com)