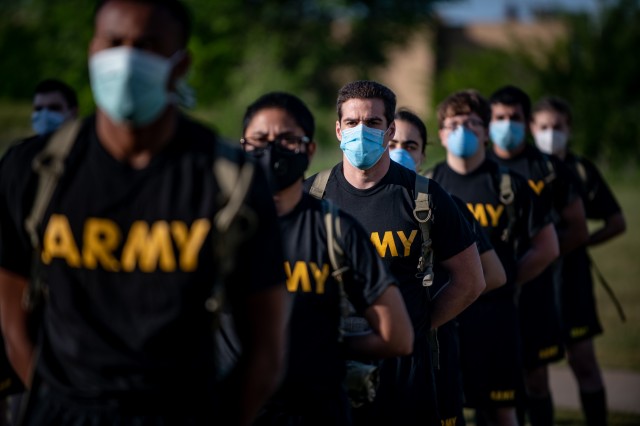 Under the setup instituted after Fort Sill’s three-week Health and Safety Stand Down, new arrivals don’t go through in-processing with the 95th Adjutant General Battalion (Reception) until after their first two weeks of training.

That means they have to wait two weeks for their first Army haircut. They get that when they go back to 95th AG for three days to get their ID cards, dental and vision exams, and uniforms. This helps protect the 95th’s workforce and reduces risk to all involved during reception activities.

During the recent three-week stand down, Army officials conducted a risk assessment and pushed directives down through the brigade and the battalions to the battery level. These directives told battery personnel what changes they needed to make for basic training to resume.

Upon arrival recruits have their temperature taken and they are asked a series of questions before being tested for COVID-19. Badger said recruits are asked if they have any symptoms. If they show symptoms they will be placed under quarantine until it can be confirmed whether they are positive or negative for the virus.

Nurses do the testing for Task Force Phoenix on a covered pad in the A Battery, 95th AG Battalion area. Incoming recruits who test positive are put in quarantine for two weeks. Nurses trace their close contacts and put them in isolation as well. This lasts until they test negative, Badger explained.

Those who test negative for the disease go into their first two weeks of basic training, which looks considerably different than it did pre-COVID-19. Cooley said the changes include emphasis on social distancing, adherence to face coverings, limits on travel, increasing the number of buses so passengers can keep at least 6 feet apart, and greater frequency of sanitation and cleaning to follow Department of Defense and Centers for Disease Control and Prevention guidelines.

Badger said the “two plus eight” model was introduced to reduce the number of trainees in a given area. Where before C/1-79th FA was authorized for up to 240 trainees, it now operates under a “half-fill” model of 120 to provide social distancing within a bay. Each bay is now limited to 30 trainees and there’s an empty bed between each one.

Before filling, all cadre are tested for COVID-19 prior to new trainees come in.

All the new trainees and their cadre wear face masks whenever they aren’t able to maintain social distance.

The first two weeks of basic are mostly classroom activities. The trainees are divided up into four platoons that have no contact with each other. That way, if an individual comes down with the disease in one platoon, the other platoons won’t be affected.

Right now each platoon has 29 trainees, and they do physical training at a platoon level in a socially distanced manner.

Some learning modules from the last eight weeks of basic are front-loaded into the first two weeks because they are easy to accomplish within the new limitations. These modules include equal opportunity, prevention of sexual harassment/assault, and some of the drill and ceremony, customs and courtesies.

After the first two weeks are up, all the trainees are re-tested for COVID-19 upon their return to the 95th AG, Cooley said. Once they test negative again, they finish their in-processing. In addition to the haircut, ID cards, vision and dental screenings, immunizations, and uniform issue, they will be fitted for hearing protection.

After that three-day process the trainees return to C/1-79th FA for the remaining eight weeks of basic training. Badger said they get their equipment and go right into training. Cooley said they still wear face masks anytime the battery can’t properly do social distancing. The same is true of drill sergeants.

Social distance does affect some of the training requirements. For now, combatives and pugil sticks are off-limits. Ordinarily these are required for graduation, but both the

434th FA Brigade and the Army as a whole are waiving them due to the COVID-19 outbreak.

A few small things in the beginning of basic training have been cut out, namely Treadwell Tower and the Combat Conditioning Course. But the battery makes up for these omissions later. In the first week of “plus eight” trainees go to the Combat Obstacle Course near Quinette Crossing and again later on to meet that graduation requirement.

“It kind of made the schedule tighter, but we’re able to get after everything we need to get after, to make them Soldiers,” Badger said.

How is “two plus eight” working out? The first sergeant admits he was kind of skeptical at first, but he’s noticed that the discipline level of the trainees has gone up because of some of the things that are stressed during the first two weeks.

“You’re seeing a lot of good out of it. We’re able to give them more PT, and they get good PT. We’re able to teach them PT in a little more depth. The two weeks has been good,” Badger finds.

Cooley said the trainees have no previous experience with basic training so they have nothing to compare it to, and they’re finding the training beneficial to them.

C/1-79th FA had a virtual basic training graduation ceremony in late March, before the Health and Safety Stand Down. Family members weren’t allowed to attend in person, but they could watch via livestream on Facebook. Graduates were socially distanced as they sat in the pews of Cache Creek Chapel. There were no loud cadences, no handshakes, and instead of their mentors putting on their new rank during the promotions part of Family Day, the cadets did it themselves.

Unfortunately, at this time basic training graduates are not allowed to see their families before they go into Advanced Individual Training. They’ve been in a sterile environment for 10 weeks, and that’s how it will stay until their initial entry training is done.

“It’s a cultural shift, but it’s necessary,” Badger said. “With everything that’s going on, if you look at the military, we get people from all over the country, so we need to take these steps (to prevent the spread of COVID-19). And I think we’ve done a pretty good job with it, to be honest. I think the brigade as a whole, and I think that the post as a whole, has done a good job of preventing any sort of spread.”