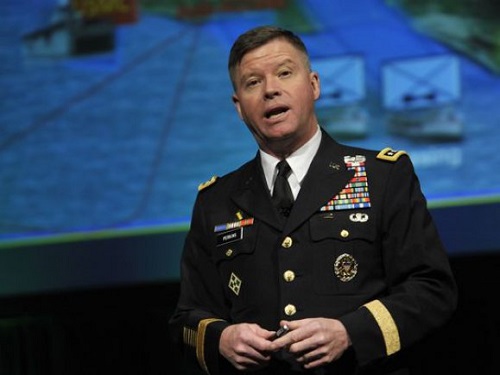 HUNTSVILLE, Ala. (March 23, 2016) – Gen. David G. Perkins, commanding general of U.S. Army Training and Doctrine Command, discussed TRADOC’s perspectives on “Big 8” initiatives and how the Army Operating Concept will build the future Army during the 2016 Association of the United States Army’s Global Force Symposium at the Van Braun Center, March 17.

“As the Army looks to the future, the force will have to operate under a persistent climate of complexity,” Perkins said. “The enemy also operates in this environment, and as a result, winning in a complex world means constantly evolving and repositioning the Army to provide enemies with multiple dilemmas, matched with multiple capabilities, through a higher rate of innovation.”

Perkins stressed the importance of providing commanders on the ground with multiple options at the tactical, operational and strategic levels of war, but to do so requires the Army to innovate quicker.

An important consideration is that the enemy is also changing and evolving at a rapid rate. “If we buy a new tank, the enemy will develop a new threat to take out that tank. That’s why we must innovate new capabilities that will keep us ahead of the enemy.

Perkins went on to explain eight capability areas TRADOC has determined the Army needs to increase its rate of innovation to stay ahead of the enemy.”

These capabilities emerged from TRADOC’s campaign of learning, using the 20 Army Warfighting Challenges, and require senior leader emphasis to synchronize across the services and industry.

The world is changing and adversaries today have no set template for how they fight, and the Big 8 capabilities will help increase the rate of innovation giving an asymmetric advantage in future conflicts, according to Perkins.

“The Army does not buy things to fight, we develop capabilities to win in a complex world that is ever changing. This includes not only technology but also developing people — innovative professionals, who adapt quickly to changing threats,” Perkins said. “The Soldier is the centerpiece of the solution.”

The full video of Gen. Perkin’s remarks at the Global Force Symposium is available on TRADOC’s YouTube channel.