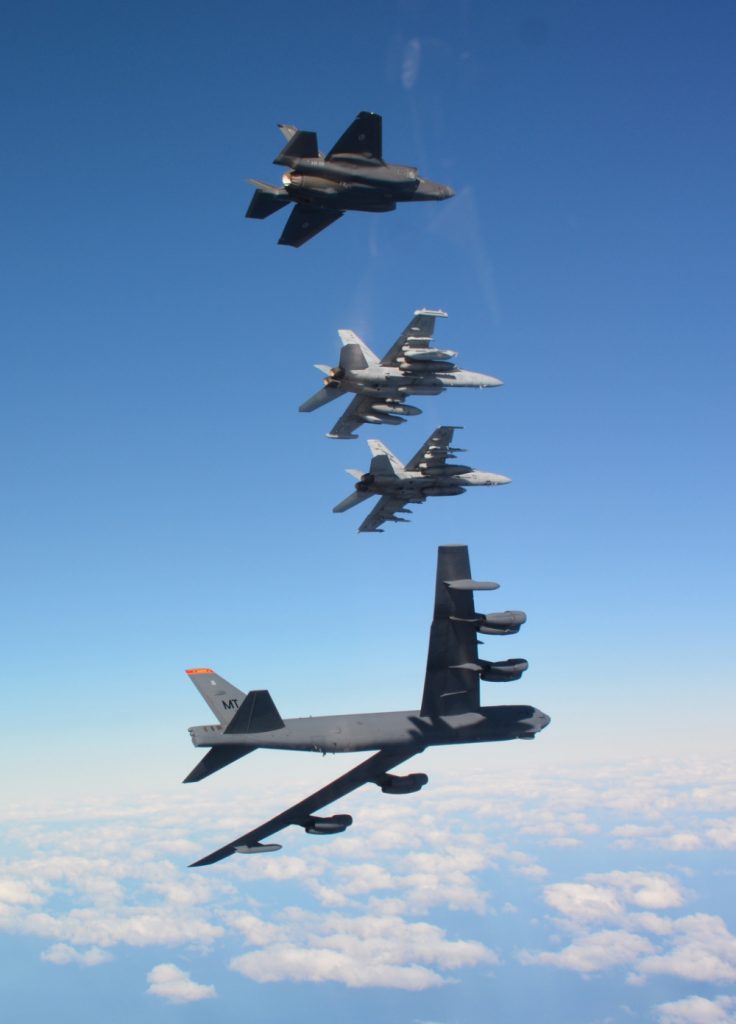 AUGUST 3, 2021 – The edge of the Stratofortress’s wing flexes upward toward the horizon as the B-52H Stratofortress banks westward over the vast expanse of the Pacific Ocean.

The B-52, which has been the foundation of the U.S. Air Force Global Strike bomber triad for more than 60 years, launched before dawn on from Andersen AFB, Guam, and flew several thousand miles, and most of the day, to complete its mission – conducting bombing runs on a variety of targets, acquired and guided by U.S. and allied forces.

Their mission accomplished, the crew of five was relieved, yet fatigued, after hours of intense focus in the cockpit, on the navigator’s panel and in the electronic warfare officer’s seat.

While departing from the target area after their final bomb run, a sleek, light-grey jet joined up just few feet from the tip of the starboard wing; a distinctive kangaroo roundel visible below the front cockpit of the F/A-18F Super Hornet.

“Flying together with our RAAF allies sends a clear message that we can and will fight as a team,” said Lt Col Roy Lohse, Bomber Liaison Officer at RAAF Base Amberley.

The mission of the U.S. Bomber Task Force in Guam is multifaceted, but, as part of their Bomber Task Force deployment, the crews from the 5th Bomb Wing at Minot AFB, North Dakota, flew their aircraft non-stop to Andersen AFB where they staged in support of Exercise Talisman Sabre 2021.

“TS21 offers a unique opportunity for our strategic bomber force to prepare for the challenges of power projection across the vast distances of the INDOPACOM area of responsibility,” said Lohse.

TS21 is a large-scale, bilateral military exercise taking place from 18-31 July 2021, between Australia and the U.S. It involves approximately 17,000 participants from seven nations.

“”Exercise Talisman Sabre 2021 provides Pacific Air Forces personnel and assets a realistic training environment where we can build trust and interoperability with our allies from across the Indo-Pacific region,” said Col Barley Baldwin, 13th Air Expeditionary Group commander. “These relationships are vital for insuring a free and open Indo-Pacific, and it is great to come back and see so many of our hosts, our tremendous Aussie friends, that I’ve worked with over the years. The enduring relationships, mateship, and trust make building our interoperability much easier.”

The B-52H Stratofortress was just one aircraft in the dissimilar formation. Accompanying the Stratofortress from the 69th Expeditionary Bomb Squadron was a Royal Australian Air Force EA-18G Growler from No.6 Squadron (SQN), a No.1 SQN F/A-18F Super Hornet, and a F-35A Lightning II aircraft from No.3 SQN.

Even with the complexities of flying a variety of different aircraft just feet apart, combined training over months and years and the resulting high levels of interoperability made the intricacies of the maneuver second nature to the pilots.

On top of physically training together in a shared environment, TS21 advances the Indo-Pacific Pathway’s initiative to promote a free and open Indo-Pacific and supports the shared value system of U.S. allies in the region.

The training provided to the U.S. Air Force as well as the joint and combined military forces from Australia, Japan, Canada, the Republic of Korea, the U.K. and New Zealand, allows for seamless integration in wartime and supports the U.S. National Defense Strategy by enhancing abilities to protect the homeland and addressing the full range of potential security concerns in the Indo-Pacific.

“TS21 showcases our ability to deliver capable, combat-ready, lethal airpower on short notice to any corner of the world alongside our tremendously capable partners and allies,” said Baldwin.