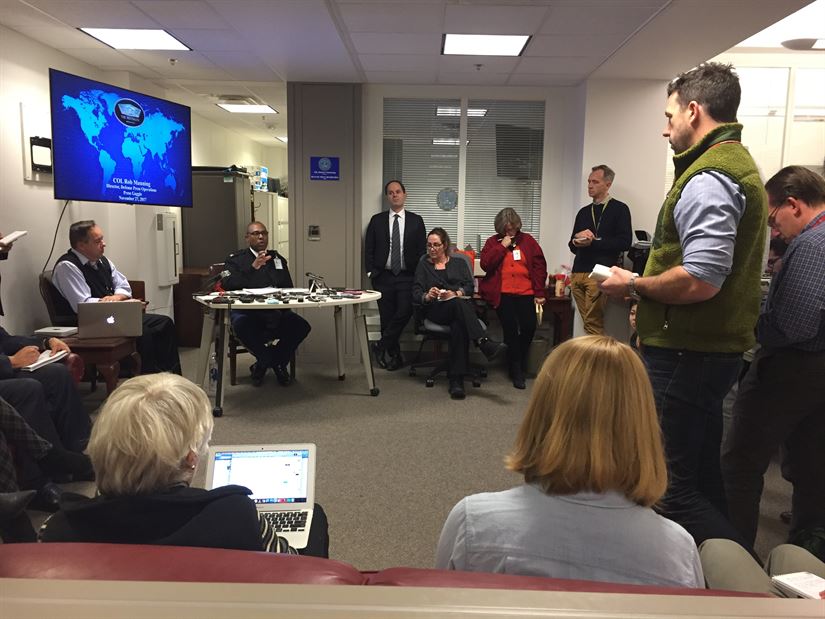 NOVEMBER 28, 2017, Washington D.C. – The Nov. 24 attack on an Egyptian mosque in northern Sinai that killed at least 305 men, women and children is an example of why the United States must remain involved in the Middle East, Pentagon spokesman Army Col. Rob Manning said today.

The United States must help partner nations build their own defense and police capacity to “ensure [the Islamic State of Iraq and Syria], al-Qaida and like-minded groups cannot plan and carry out attacks,” he said.

Manning gave an overview of the area during his weekly press gaggle with Pentagon reporters. He said there are roughly 500 U.S. forces in Syria and around 5,000 in Iraq. Defense Department officials are working on providing a better run-down of U.S. forces in the countries as security considerations permit, the colonel said.

Iraqi forces are working to improve security in areas they have retaken from ISIS control, Manning said. This includes going into areas to clear them of improvised explosive devices, clearing out weapons caches, disarm booby traps and rooting out ISIS hold-outs.

“In Syria, in the last 24 hours, the [Syrian Democratic Forces] has reinforced positions near the Iraq-Syria border, repelling an ISIS reconnaissance element,” he said.

Over the weekend, President Donald J. Trump spoke with Turkish President Recep Tayyip Erdogan and discussed the U.S. supply of arms to the SDF. Turkish leaders are worried that arms supplied to the Kurdish portion of the SDF could end up in the hands of the [Kurdistan Workers’ Party] — a designated Foreign Terrorist Organization.

“Consistent with that policy, we’re reviewing pending adjustments to the military support provided to our Kurdish partners [in the SDF], in as much as the military requirements of our defeat-ISIS and stabilization efforts will allow us to prevent ISIS from returning,” Manning said. “We remain very clear in that we are going to continue to target ISIS and remain committed to protecting our NATO ally Turkey.”

Weapons provided to the SDF are limited and mission specific, the colonel said.