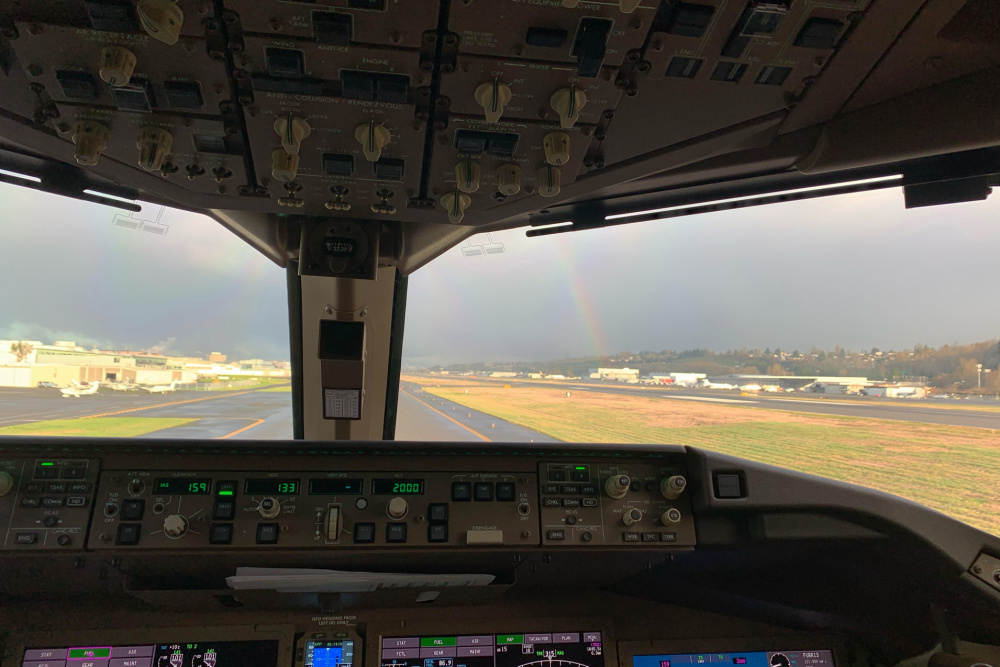 FEBRUARY 8, 2021 – The 157th Air Refueling Wing has its full complement of planes, following the delivery of a KC-46A Pegasus aerial refueler directly from the factory to Pease Air National Guard Base, Newington, New Hampshire, Feb. 5.

The arrival brings the base’s fleet to its full roster of 12 jets.

Perron, the pilot in command and also the 157th Operations Group commander, said the atmosphere surrounding the flight was one of excitement. As they taxied the plane to the runway at Boeing Field, company employees lined the taxiway to cheer the departure. And, as if on cue, a rainbow appeared over the runway as they prepared for takeoff.

As the aircraft landed at Pease, a small ceremony was underway inside Pease’s newly renovated hangar. The ceremony was attended by a congressional delegation, led by U.S. Sen. Jeanne Shaheen.

Beneath the wings of a KC-46A parked inside the hangar, Col. John Pogorek, 157th Air Refueling Wing commander, delivered a few brief remarks to the small, socially distanced crowd. He noted that Pease was the first base to receive its full fleet of Pegasus jets and spoke about the next-generation operational capabilities of the new fleet, including enhanced threat protection and better communications equipment. The aircraft will be used to carry out a variety of missions, including aerial refueling, aeromedical transports, and carrying passengers and cargo.

“Here at Pease, we have a history of performance and excellence, as well as community support, and that is why we were chosen to receive the Air Force’s newest platform” said Pogorek.

As Pogorek was finishing his remarks, his voice was drowned out by the sound of new the jet as it taxied towards the hangar. A translucent, house-sized door was raised, unveiling the new arrival.

The attendees walked out onto the tarmac to greet the aircrew and dignitaries planeside. Many stopped along the way to snap photos of the historic moment. After opening the plane door, the crew unfurled U.S. and New Hampshire flags at the top of the crew stairs to commemorate the moment.

Pease personnel continue to transition to the new platform, with ongoing conversion training for aircrews, boom operators and maintainers.

“The arrival of our final aircraft means we can continue to provide value and relevancy when called upon,” said Perron, noting that the wing has already participated in a number of real-world missions, including a recent flight to refuel F/A-18 Navy jets as they crossed the Pacific Ocean.

Fielding the KC-46A is an important step in recapitalizing the service’s aging fleet; the Air Force plans to replace 179 of its more than 450 tankers with the KC-46A. The jet provides increased survivability, enhanced communications, self-protection, and the situational awareness needed to compete, deter and win in complex security environments.