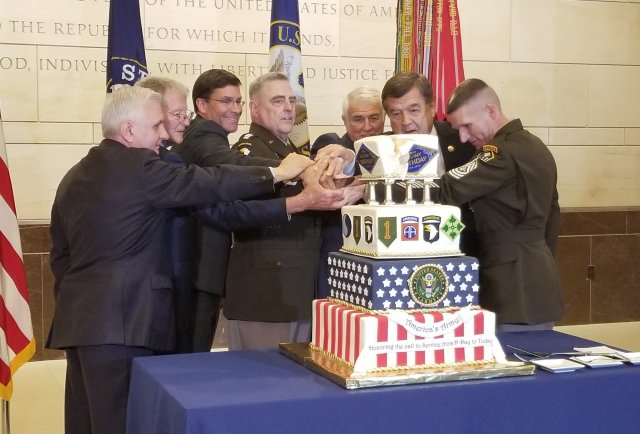 JUNE 13, 2019 – As Army Chief of Staff Gen. Mark A. Milley spoke to veterans at the 75th anniversary of the D-Day invasion, he asked what lessons they had learned from hitting the beach in that deadly campaign.

Milley called it the “single most violent conflict in human history” when over 150,000 allied troops stormed the heavily fortified coast of France’s Normandy region on June 6, 1944.

By the time the campaign ended in early August, nearly 37,000 ground troops had been killed.

On Wednesday, while at a cake-cutting ceremony at the U.S. Capitol to officially kick off events for the Army’s 244th birthday, Milley said that sacrifice should not be forgotten.

“I think that’s the lesson of great power competition, great power war,” he said. “Let us never forget that 75 years ago the world was amass in violence. And the way to keep that peace is to maintain an incredibly strong military for the United States.”

CONGRESS FORMS ARMY
On June 14, 1775, the Second Continental Congress formed the Continental Army under the command of George Washington to unify the 13 colonies in their fight against British forces.

When the Revolutionary War ended, the Congress of the Confederation created the U.S. Army to replace the disbanded Continental Army on June 3, 1784.

“We were born as the result of the United States Congress,” Milley said. “The United States Army could not be the most powerful army in the world … without all the great support that we get from the Senate and the House.”

Throughout the years, Soldiers have played an integral part in the nation’s wars as well as defending the homeland and conducting humanitarian assistance across the country and around the world.

Today, the Army’s total force numbers about 1 million and some 180,000 Soldiers are deployed in over 140 countries at any given time.

ARMY’S RENAISSANCE
“Your United States Army has to be ready today for that future fight,” said Army Secretary Mark T. Esper during the ceremony.

Esper also mentioned the Army should learn from the Greatest Generation, which fought and defeated Nazi Germany, imperial Japan and fascist Italy.

The Army is now in the middle of a renaissance, he said, as it changes the way it mans, trains and equips the force in order to stay ahead of near-peer threats.

On Thursday, senior leaders plan to host another cake-cutting ceremony at the Pentagon.

On Friday morning — the actual day of the Army’s birthday — Esper and Sgt. Maj. of the Army Daniel Dailey are slated to lead an Army staff birthday run with Soldiers and members of Congress through Arlington National Cemetery.

Senior leaders will then lay a wreath at the Tomb of the Unknowns later that day at the cemetery.

The Army Birthday Ball, which about 1,600 personnel are expected to attend, will take place at the Washington Hilton on Saturday.

The Washington Nationals baseball team will host an Army Day at Nationals Park on June 18. Esper plans to throw out the first pitch and the game ball will be delivered by Milley.

There will also be a third-inning salute with senior leaders and the Army Chorus. The team’s mascot presidents will even conduct their routine race in Army uniforms.

Army installations and communities are also holding their own local events during the Army’s birthday week.