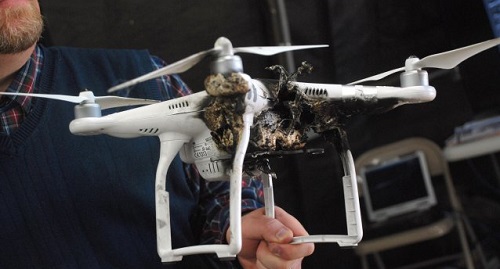 WASHINGTON, May 19, 2016 – Last month, the Army’s Space and Missile Defense Command proved again how effective the High Energy Laser Mobile Test Truck is at destroying unmanned aerial vehicles, quad-copters and even laptops with just a blast of concentrated light.

“It completely destroyed the laptops,” said Adam Aberle, the High Energy Laser technology development and demonstration lead for the Army Space and Missile Defense Command/Army Forces Strategic Command, or USASMDC/ARSTRAT Technical Center. “It melts all the plastic, fractures the screen, and basically renders the laptop unusable.”

The HELMTT includes a 10-kilowatt laser — equivalent to about 10 million handheld laser pointers — a beam control system, acquisition and tracking sensors, and other supporting equipment, mounted on a Heavy Expanded Mobility Tactical Truck, or HEMTT. The system is designed to track incoming threats, such as rockets, artillery, cruise missiles, UAVs, and even threats on the ground, and then destroy them with a laser, rather than with kinetic munitions.

For the first time, that system went to Fort Sill, Oklahoma, to participate in the April 11-19 “Maneuver Fires Integrated Experiment” there. The MFIX was hosted by the Fort Sill Fires Center of Excellence Battle Lab.

For the HELMTT and the USASMDC/ARSTRAT team responsible for its development, participation in the MFIX demonstrated its ability to integrate with other military equipment and be an effective weapon system during a combat situation, said Aberle.

We were able “to simulate a kind of battlefield command and control network, and … demonstrate the interconnectivity of all these emerging systems and capabilities with the goal of looking at what could be done for the Army of 2025.

“It really was a beginning-to-end experiment, from the standpoint of detecting and identifying potential threat targets by a sensor, giving that information to an Army command center, making the assessment that there are threats in the air or threats on the ground, and handing that information over to a weapons system.”

At the MFIX, Aberle said, the HELMTT performed as expected and caught the attention of exercise participants as well, not just for its performance, but also because it was the first time that Fort Sill had seen or had a high energy laser system on one of its ranges.

“HELMTT’s performance out there against the targets presented was excellent,” Aberle said. “We shot down a large number of UAVs and quad-copters. Soldiers were impressed. There were lots of comments like ‘I didn’t know you could do this with a laser.'”

During the MFIX, the HELMTT also destroyed a laptop computer as a demonstration of how the system might be used to disable enemy command and control systems, Aberle said.

Aberle said the HELMTT is meant to provide a weapons system to Soldiers that requires less logistics support than a kinetic weapons system, and is less costly to operate.

With a laser, Aberle said, Soldiers have virtually unlimited rounds to fire at incoming targets — rounds that don’t need to be replaced by the next convoy that comes in. The laser just needs electrical power. And that power is provided by the HELMTT’s onboard diesel generator.

“The real benefit is that you a have a large number of engagements you can conduct,” he said. “You can store the power, so you have a large number of those [engagements] that can happen. And the logistics to support the engagement is easy. It just requires diesel fuel to power a generator that is onboard on the platform. The real benefit when you look at it from the ‘big Army’ perspective is that those engagements are very cheap to do. To do an engagement of a target is really two cups of diesel fuel. That’s all the cost associated to negate an unmanned air vehicle, a rocket, artillery, or mortar threat. It’s a cheap engagement.”

Aberle said that one challenge for the HELMTT system is the weather, and mitigating the effects of differing atmospheric conditions on how the laser is able to disable a target. For that reason, and others, he said he doesn’t see HELMTT as a replacement for kinetic systems.

“We view a laser weapons system as something that is complementary to a kinetic energy or gun system,” he said.

Aberle said his team aims to put a more powerful laser on the system to make it more effective. But he also said that Soldiers want to see it mounted on a smaller platform — something like a Stryker or on one of the Family of Medium Tactical Vehicles platforms.

“We need more power,” he said. “We have to integrate higher power lasers. But we also have to make them smaller and more efficient to make them fit on platforms that are maneuverable with the force of the future. We received feedback: can you put it on a smaller vehicle to move with a maneuver force? That’s really the challenge for us.”

Next year, he said, they will replace the 10kW laser with a 60kW laser. USASMDC/ARSTRAT has also worked with two industry partners to mount a 2kW laser on a Stryker vehicle. That’s called a Mobile Expeditionary High Energy Laser, or Stryker MEHEL.