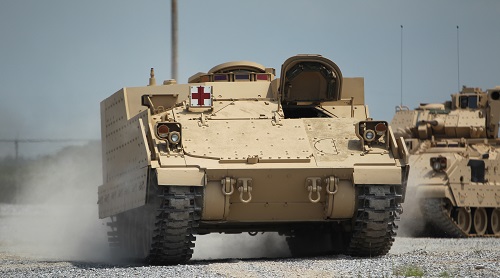 DECEMBER 9, 2016, WASHINGTON (Army News Service) – The first Armored Multi-Purpose Vehicle, or AMPV, is scheduled to be handed over to the Army Dec. 15 for testing.

The AMPV demonstrator will roll out of the BAE Systems plant in York, Pennsylvania, to begin a 52-month engineering and manufacturing development phase for the vehicle. At least 29 of the vehicles will be manufactured for this EMD phase of the procurement process, officials said.

If the low-rate production option for the AMPV is approved, procurement officials said several hundred of the vehicles will be manufactured for testing over the next four years.

The AMPV will replace the armored brigade combat team’s M113 Family of Vehicles. The AMPV addresses the M113’s shortcomings in survivability and force protection, and size, weight, power, and cooling, known as SWAP-C; officials said. It will also be able to incorporate future technologies and the Army’s network.

AMPV has a brand new hull, but it maintains some of the Bradley legacy design, so there are some compatibility efficiencies in getting it built on schedule, said Maj. Gen. David G. Bassett, program executive officer for Ground Combat Systems.

In fact, about 60 to 70 percent of the parts are common with existing ground combat vehicles, Bassett said during a press conference in October.

The AMPV has the additional space inside for adding new systems in the future, and it comes with an improved power train. The hull is stronger from a force protection perspective, too, he said.

Meanwhile, many Bradleys are still in service, “so we’re building new capabilities in an incremental way over time,” he added.

“I’d love to have replacement programs today for Abrams and Bradleys,” Bassett said. “We could get those plans [for replacements], but it just doesn’t fit into this portfolio and budget requirement, so instead we’re looking at, do you want to do an ECP-3 [engineering change proposal] on a Bradley or do you want to bridge to a new platform? We’re making informed decisions.”

The M-109 Paladin, the M1 Abrams tank and the M-2 Bradley have been around for decades, but their capabilities today are nothing like they were when they originally rolled out of the factory, Bassett said.

The vehicles are updated periodically with various upgrades as new technologies evolve, making them far more capable than their original design, noted Bassett, who is the program executive officer for Ground Combat Systems.

“At the end of the day, a combat vehicle is about a box,” he said. “[Inside, are the latest] mobility system, lethality system, communications system and some other things. If you can take all those and put them on an existing vehicle, then maybe you don’t have to build a whole new vehicle from scratch, along with the risks associated with that kind of development.”

The box concept does have its limitations, though, he added. For instance, the size of the power train on a Bradley is limited because of the size of the engine cavity, so plopping in a larger one isn’t possible. But still, even if the hull has to someday be replaced, some elements of the existing vehicle could be retained.

The AMPV, “is a great example of that,” he pointed out, with its brand new hull and many Bradley legacy designs.

Besides using existing platforms in ways that designers never anticipated, Bassett said, the Army has been saving money in other ways .

“Across the board, the way we’re affording all the things we’re affording is by producing things at really low rates, which gives us an operational flexibility to ramp up when dollars are available,” he said, adding “that creates fairly slow modernization across our formation.”

For instance, production rates on Stryker for the engineering change proposal could be as little as one brigade every three years “because you’re just not getting at the level of resources to create an efficient production rate,” he said.

As to the modernization rates of Abrams and Bradleys, they will certainly be less than a brigade a year, he said. “Those are all symptoms of that budget environment.”

Bassett also said infantry brigade combat teams need something like a light tank, since the Abrams has problems with it being too heavy to be air dropped and once on the ground, it can’t get maneuver in constricted areas like narrow mountain roads or alleyways.

When industry was invited to the Maneuver Center of Excellence at Fort Benning, Georgia, in August, the technical requirements were purposely kept to a minimum, he said, because “we’re trying to be open-minded.”

For instance, less than 32 tons maximum weight was one requirement, so it could be air dropped, he said.

Another requirement was the cannon had to be able to destroy a certain amount of targets and provide a certain level of protection. The cannon could be 57mm, 105mm or 120mm, mainly to save money because those cannons are already in the Army’s inventory, he explained.

Like a tank, the new vehicle should be tracked, said Col. Jim Schirmer, project manager for armored fighting vehicles. He said that requirement is so it can go over rubble from destroyed buildings and things like burned-out cars.

The MPF will include a suite of vehicles, Schirmer said, including ground mobility vehicles, light reconnaissance vehicles as well as the tracked vehicle just described.

As to the timeline, the Army is initiating prototyping to develop the MPF while pursuing short-term, non-developmental alternatives, Bassett said.

The Army is preparing now to issue an “analysis of alternatives” for the MPV in early 2017. A competitive request for proposal may also be released next year.

“We’re not willing to go through a lengthy bottom-up design process,” Bassett said. “We’re willing to give you time on your own to get a design ready to compete and then we’ll evaluate that fairly rapidly in the engineering, manufacturing, development phase, not unlike what the Marine Corps did … where they project requirements from industry, got some feedback, risk mitigation activities and then laid out a program where they didn’t pay industry to design very much. They asked them to deliver within a fairly short period of time. We’re trying to model that strategy,” Bassett said.

He added that “we can learn a lot from the Marine Corps and programs like JLTV [Joint Light Tactical Vehicle] where we benefited greatly from competition of more than one vendor.”