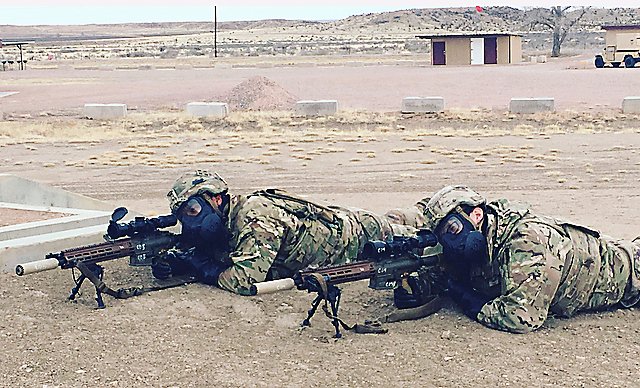 Engineered as an upgrade to the M110 Semi-Automatic Sniper System, the Compact, Semi-Automatic Sniper Rifle (CSASS) was redesigned to enhance a Sniper’s capability to perform missions with greater lethality and survivability, according to Maj. Mindy Brown, CSASS test officer with the Fort Hood, Texas-based U.S. Army Operational test Command.

Upgrades being tested include increased accuracy, plus other ergonomic features like reduced weight and operations with or without a suppressor.

Brown said the purpose of the operational test is to collect performance data and Soldier feedback to inform the Army’s procurement decision regarding the rifle.

“We do this by having the Snipers employ the system in the manner and the environment they would in combat,” Brown said.

“In doing this, we achieve a twofold benefit for the Army as we test modernization efforts while simultaneously building unit — or in this case — Sniper readiness.”

She went on to explain how the 2nd IBCT snipers stressed the rifles as only operators can, during the 10-day record test.

The Snipers fired 8,000 rounds from various positions while wearing individual protective and tactical equipment as well as their Ghillie suits and cold weather gear.

To also test how the CSASS allowed Snipers to shoot, move, and communicate in a realistic combat environment, they also executed Situational Training Exercise (STX) force-on-force missions in what they described as, “the best Sniper training they’d received since attending Sniper School at Fort Benning, Ga.”

The 2nd IBCT Snipers really pushed each other, testing the CSASS in what evolved into a competitive environment on the ranges.

An agreed upon highlight of the test among the Snipers was the force-on-force day and night STX Lanes.

Sniper teams were pitted against one another on tactical lanes in natural environmental and Urban Terrain to see who could infiltrate, detect, and engage whom first.

Sherwood said he was able to learn from the other test Snipers and improve his field craft.

“In a regular Sniper Section, I would never get this much trigger time with a Sniper rifle or be issued nearly as much ammunition to train with in a fiscal year, let alone a 10-day period,” he said.

While OTC celebrates its 50th Anniversary, 2nd IBCT Snipers and OTC’s CSASS Test Team are a testament to the importance of the half century relationship between the Operational Force and the test community.

“As we move into a period of focused modernization, now, more than ever, that relationship is decisive to ensuring only the best materiel capability solutions make it into the hands of the men and women in uniform serving on the front lines around the world and at home,” Brown said.