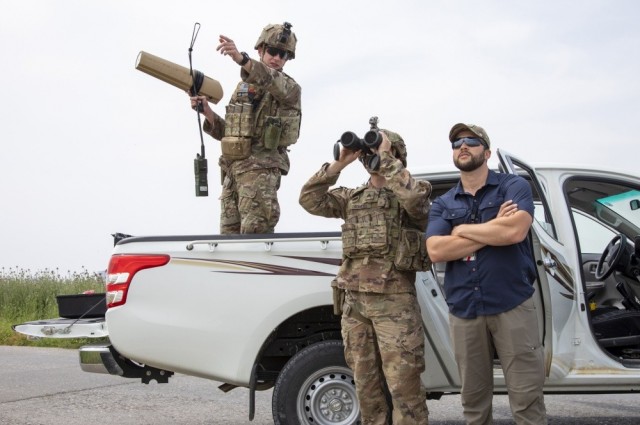 JUNE 30, 2020 – The Army is leading a joint effort to align its counter-drone systems into a streamlined command and control architecture, officials said, enabling more “plug and play” technology on an increasingly joint battlefield.

All types of drone-zappers were assessed and evaluated on multiple criteria, said Maj. Gen. Sean A. Gainey, director of the Joint Counter-Small Unmanned Aircraft Systems office, or JCO, but the most prominent question remained: “Will it plug and play with emerging industry technologies?”

The Defense Department is bringing “an enterprise approach to a critical capability area, and providing the tools [needed] to enable U.S. forces to adapt when facing UAS threats,” Gainey said. “Our goal is to align existing and future technology solutions to operational needs while applying resources more efficiently.”

In November, the Army was tapped to be the executive agent for the Counter-Small Unmanned Aircraft System, or C-sUAS, office to counter hostile drone systems. By January, when Gainey took command, the 60-person team started identifying and prioritizing joint gaps in readily-available systems.

By using a “system of systems approach,” Gainey said, the C-sUAS office initially gauged 40 systems needed to primarily detect, access, and engage with enemy drones. That initial list whittled down to seven defense systems, and one streamlined command and control, or C2, system. The official list was released Thursday.

However, currently fielded anti-drone systems not listed won’t be immediately scrapped. They will stay in use until they can be replaced with something from the approved list, Gainey said. “This method won’t just determine the selection of current systems today, but also future investments based on criteria such as effectiveness, usability, and integration.”

The phased selection process for the chosen systems was measured on an array of criteria that focused on a system’s ability to detect, track, and defeat threats along with their overall usability, sustainment, ease of integration, and relationship toward enduring solutions, Gainey said. The most important, however, was how the system operated on a C2 battlefield.

Armed with that criteria, the C-sUAS office worked with the Rapid Capabilities and Critical Technologies Office and put together a board represented by all the services, including the United States Special Operations Command.

The joint team came together and figured out which systems would be here for good, he said. Their final selections splintered into three target areas, including fixed and semi-fixed systems, mobile mounted systems, and handheld dismounted systems for troops on foot.

“Each service has each been assigned to sponsor one of those systems,” Gainey said. “So as we move this forward as a joint approach, we’ll coordinate the future upgrades of these systems and the contracting of these systems across the Joint Force.”

One of the fixed or semi-fixed systems chosen was FS-LIDS, which is a fixed site – low, slow, small unmanned aircraft system integrated defeat system. The FS-LIDS system is an Army-led “system of systems” approach, Gainey said, which means it’s not a standalone electronic system, but rather a kinetic capabilities system with multiple hardware and software parts that are interoperable.

As the Army takes responsibility to further develop the FS-LIDS system, the Navy opted to refine another fixed technology — CORIAN, a counter-remote control model aircraft integrated air defense network. Both systems are used to disrupt drone signals, and they are interoperable with each other.

The last fixed system chosen was the Air Force’s NINJA system, or Negation of Improvised Non-state Joint Aerial threats. Like the others, NINJA zaps radiofrequency communications between a UAS and its operator, and is interoperable with its counterparts.

Each of the three fixed or semi-fixed systems kinetically fuse, Gainey said, adding, “that’s what we found during this assessment. A ‘system of systems’ approach gives the best opportunity to defeat the threat as opposed to a single-system employed technology.”

When it comes to mounted systems, the LMADIS, or light-mobile air defense integrated system, was the single, go-to pick. The LMADIS is a portable jammer system, sponsored by the Marine Corps, and is capable of breaking up communications between drones and their operators from a mounted vehicle.

Only one of three mobile devices are currently sponsored, however all three are available for service use, Gainey said. SOCOM will sponsor the Bal Chatri, but the Drone Buster and Smart Shooter devices will not be sponsored. Each handheld device can be used while patrolling an area.

The guiding principle behind every selection is interoperability, Gainey said. “The command and control technology brings it all together. This initiative will bring an enterprise approach to a critical capability area and provide the tools warfighters [need] to better adapt to changing threats.”

The success of their choices relies on the service’s ability to embrace the command and control standards, or C2, Gainey said. “This will allow the plug-in-play of emerging technology from industry into our architecture.”

All that said, there is no interim timeline, Gainey said, despite the interim selections. As the C-sUAS office continues to work with industry, test new devices, and bring on emerging technologies to the DOD, “Our strategy is to continually improve the current capability we have, while testing and looking at the new technology to bring it on, not through this sort of slow, methodical way.”

Moving forward, the objective is clear: continually improving the systems with joint solutions. C-sUAS is working on a capability development document, or CDD, to lay out a blueprint for those emerging technologies. The first draft, slated for a fall release, will also open the door for industry to compete as the military moves forward, Gainey said.

Although unpublished, the initial draft of the CDD focuses on the interim capabilities identified in the assessment, and how it bridges the strategy of current system-to-objective joint solutions.

“We will continue to work with industry to bring these systems to full maturity or replacement with follow-on enduring solutions,” Gainey said. “Future research, testing and investment decisions on capability modernization will consider not only the most up-to-date existing technologies but, more importantly, those new and emerging technologies currently in development.”