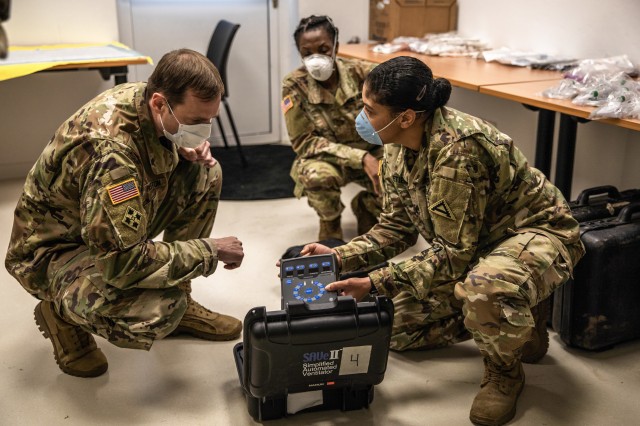 APRIL 22, 2020 – Within six to eight weeks, the Army wants to deploy more than 10,000 affordable, low-maintenance ventilators to help COVID-19 patients, says a top Army researcher, based on designs from the Army’s new virtual “Shark Tank-like” competition.

The COVID-19 Ventilator Challenge, a variant of the Army’s “xTechSearch” contest, was first announced earlier this month.

The Army is reaching out “to the innovation community to find a rapid ventilator production system to support field hospitals,” said Secretary of the Army Ryan D. McCarthy, last Thursday.

In addition, the Army is investing up to $1 million with small-business innovators to rapidly develop emergency ventilators capable of short-term, rugged field operation, said Matt Willis, laboratory management director in the Office of the Assistant Secretary of the Army for Acquisition, Logistics and Technology.

In 10 days, the Army received 150 design submissions, and judges have begun listening to initial pitches, he added. Selected developers may receive up to $100,000 each to develop a concept prototype.

The panel of judges “offer several perspectives to the competition,” Willis said. In addition to Army researchers, the panel includes medical professionals from the Uniformed Services University of the Health Sciences, engineers, scientists, and emergency room doctors currently responding to the pandemic.

“It’s all about having a cadre of experts who offer different perspectives to see what viable options we have, and when we can deliver something,” Willis said. “So far, the turnout has been tremendous. We have submissions from small and large businesses, academia, and even some people who work out of their homes.”

More virtual pitches are scheduled this week, along with initial selections. Winners will likely receive a follow-on production contract. However, there is no predetermined number of winners, Willis said; instead the top priority is accomplishing the mission.

“The $100,000 is essentially seed funding to allow companies to focus on their next steps — like working with the [U.S. Food and Drug Administration], enhance their supply chains, and this lets us solicit ideas upfront from industry partners,” Willis said.

In other words, the money funds the researchers as they work on the next stages of development, such as a concept prototype and rapid mass production.

“We want something that has a novel design, it’s innovative, validated and approved by the FDA, easy to manufacture, and is low-cost,” Willis said. “We hope it will cost a few thousand to manufacture, and needs to be deployed in austere environments.”

Ideally, emergency generators need to work with hospital-grade oxygen under pressure and function in field hospitals — similar to the ones recently stood up across the country, Willis said. Also, they must be capable of being deployed globally.

Outside of COVID-19 hotbeds like New York and New Jersey, much smaller, rural areas with medical facilities with one or two ventilators are unable to manage an increased number of patients, Willis said. “We want to bridge a solution that can be deployed into the field, or provide capabilities domestically wherever ventilators are needed.”

The Army is moving quickly, Willis explained. “We are fully active, leaning forward and pushing to identify these realistic solutions on the ventilator challenge so we can deliver them to the warfighter. This is a much faster pace than traditional [Department of Defense] activation.”

However, as fast as the Army is moving, industry partners are moving at a similar speed, he said.

This comes as the Army called on industry partners to convert their manufacturing lines to produce protective gear against COVID-19, like medical gowns, masks, and other types of personal protective equipment to battle COVID-19.

Right now, the contest has roughly a million dollars in funding but according to Willis, if great ideas keep coming, the Army may invest more.

“The Army recognizes this is a challenge that doesn’t just impact our warfighters, but the public, too,” Willis said. “That’s why we’ve pivoted our mission to lean forward, find solutions, and rapidly deploy ventilators to neighborhoods across the country.”