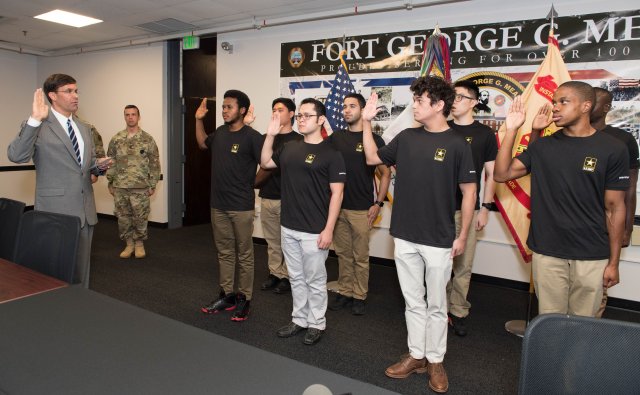 JULY 10, 2018, Fort George G. Meade, MD – In an effort to grow the force to a half million by 2028, the Army must continue to refine recruiting outreach efforts, said Secretary of the Army Dr. Mark T. Esper.

During a brief visit with 1st Recruiting Brigade at Fort George G. Meade, Maryland, on Friday, Esper had the opportunity to swear in eight enlisted recruits for the first time in his career. Earlier that day, he also swore in several officers during a private ceremony.

The Army’s ability to protect the nation stems from all the “men and women that have been willing to raise their right hand and swear the oath of allegiance to the Constitution, and to all the ideas embodied in it,” Esper said.

“These fine eight young men will do the same thing. They will join what I like to call, ‘the elite one percent’ who will defend the other 99 percent of the American people,” he added. “It is a distinct honor to stand here before the nation’s newest future Soldiers and have the privilege to deliver this sacred oath.”

REFINING THE FUTURE OF RECRUITING
Although the Army provides a wide array of career opportunities, money for college, technical and leadership skills, and credentialing opportunities, Esper said, the Army needs to find better ways to engage with America’s youth. That is especially true since the Army’s recruitment efforts face competition for talent from other services, academia, and the private sector.

Finding better ways to engage was a key point of emphasis during the secretary’s meeting with the recruitment brigade.

“Next year we’re going to try and grow by another 40,000 and that will probably be the pace we seek to set here for the coming years,” Esper said.

Social media will continue to be the platform of choice for a majority of generation Y and Z recruits. In turn, Soldiers and recruiters need to refine the way they connect with the general population, and the Army must maintain a greater online presence, Esper said.

Since the way people communicate through social media platforms is constantly evolving, U.S. Army Recruiting Command in Fort Knox, Kentucky, has the difficult task of staying up to date with online recruiting practices.

“We know that people are more connected on social media and on the Internet than they were a generation ago,” Walder said. “We have to ensure that we’ve invested in the infrastructure to support, and that we have the right people that can help us operate within that sphere.”

The brigade also outlined areas in the recruitment and medical process that could potentially be streamlined. Some of those are areas where the Army could help, Esper said.

“For example, more doctors to [MEPS], what would that mean in terms of our throughput,” Esper asked. “What does it mean in terms of narrowing the time between when a Soldier meets with a recruiter and sends his or her packet in and gets a read-out on medical qualifications? Its little things like that that could improve the process, and maybe take a little time out of the system.”

Additionally, the Army has to deal with competition from the private sector — especially when trying to recruit personnel with unique skillsets. But Esper said he thinks the Army still might be a better deal.

“[People] can go out and make money in the private sector,” Esper said. “But the Army gives you the chance to not only have a good career … [but] will also provide you with challenges. It will give you the skills you need to pivot in any other direction. It will teach you leadership … stamina, grit, and determination.”

Esper also said there’s an additional benefit to serving in the Army that might not come with civilian employment.

“Swearing an oath to the Constitution and defending our way of life,” he said, is something millions of Americans have chosen to do over the past 243 years. The Army, he said, allows those who make the decision to join, an opportunity to “serve a cause bigger than yourself.”