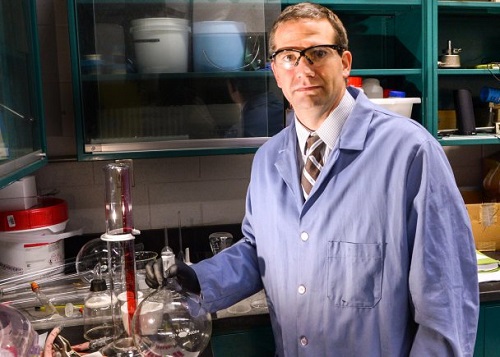 ABERDEEN PROVING GROUND, Md. (May 6, 2016) – Army scientists are on the trail of new high-performing energetic materials.

Insensitive munitions are chemically stable enough to withstand mechanical shocks, fire and impact by shrapnel, but still explode as intended to destroy their targets, he said.

“It’s been extremely challenging due to the bulk of sensitive energetic ingredients typically used in many of these munitions,” Sabatini said.

In an effort to develop even denser, higher-performing energetic ingredients for propellant and explosive applications, Army researchers are now making derivatives of BITN. Sabatini predicted the derivatives will have high densities, detonation pressures and detonation velocities.

“In assessing whether BITN and its derivatives are suitable targets to be synthesized, we have been consulting with colleagues at the U.S. Army Aviation and Missile Research, Development and Engineering Center at Redstone Arsenal, Alabama,” Sabatini said. “The collaboration serves as a prime example as to what can be accomplished when organizations work together. AMRDEC approached us with a particular need, and we were honored to play a role in helping them.”

The laboratory’s mission is to discover, innovate and transition science and technology capabilities. Researchers seek to facilitate lethality development across a broad range of Army missions, and conduct research in materials science to ensure “rapid and affordable development of materials, from discovery to delivery, critical to the Army of the future,” Sabatini said.

“There is an ever-increasing need for the development of new energetic materials for explosive applications,” they wrote. “This includes, but is not limited to, the area of primary explosives and secondary high explosives. It will be interesting to follow its progress in future years, as many of these ingredients move past the basic research area, and progress into an applied research setting to be investigated in various formulations.

In synthesizing BITN, Sabatini credited the members of his synthesis team.

“Dr. Leah Wingard, Mr. Eric Johnson, and Dr. Pablo Guzman are wonderful scientists on my team,” he said. “Their intellectual contributions and skill in the laboratory were critical in getting this material made.”