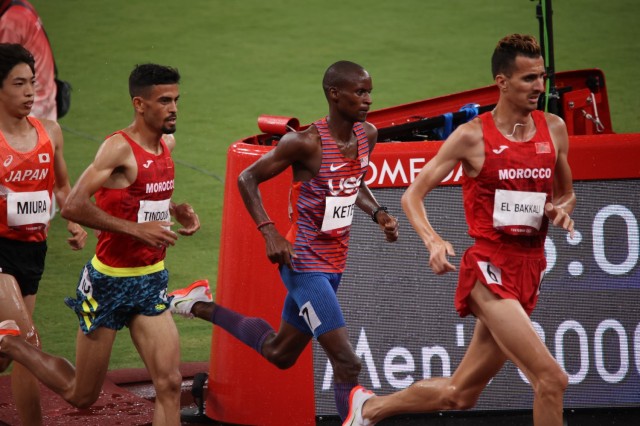 Keter, a Soldier in the Army’s World Class Athlete Program, advanced to the finals after he broke a personal best, his sixth this season, in the qualifying heat July 30, with a time of 8:17.31.

“Qualifying for the finals at my first Olympics felt great, it was the goal,” said Keter. “I kept up with the leaders, we were running really fast. I was trying to finish at the highest position.

Out of the 45 runners, 15 moved onto the finals. Keter was the only American to qualify for the finals where he represented not only the country, but the U.S. Army.

“It means everything to me,” said Keter. “Both [Team USA and the Army] have given me everything I have ever needed to be at the Olympic level.”

Back in June, Keter qualified for his first ever games at the U.S. Track and Field Olympic Trials in Eugene, Oregon.

“Every sport wants to perform at the highest level and the Olympics are the most elite you can ever compete at,” said Keter. “I have been waking up every day to train and wanting to be the best.”

Keter stayed at the Olympic village with Team USA during his time in Tokyo.

“We have been able to see all these athletes we normally only see on TV,” said Keter. “All of us are here at the same place in the highest level of performance. It is amazing to see athletes I used to watch growing it.”

“There are a lot of COVID protocols in place but that is good, we are not distracted,” said Keter. “We are here to train [and compete].”

Keter plans to run a few more races this season as he strives to compete in the Paris 2024 Summer Olympic Games.

“This season has been really good for me,” said Keter. “This is everything I have ever wanted.”

Keter was among 12 Soldier-athlete who competed at the Summer Games. Three more Soldiers are headed to compete in the Paralympic Games next month: