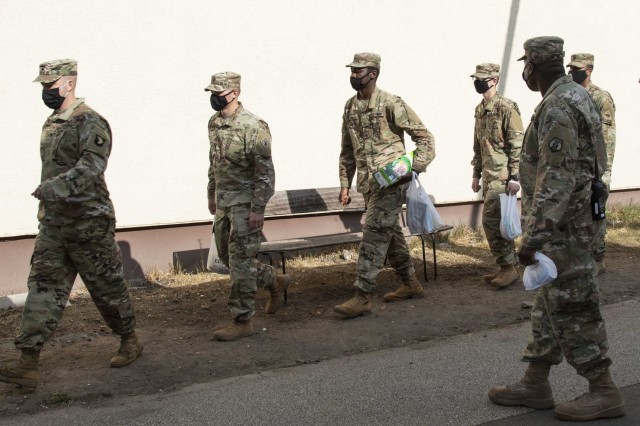 SEPTEMBER 22, 2020 – When Army Spc. David Marable greets new soldiers arriving at Rhine Ordnance Barracks, the Columbus, Georgia-native thinks about how challenging a move to Germany must be amid COVID-19 restrictions.

Hundreds of unaccompanied soldiers spend roughly two weeks at Task Force Willkommen upon their arrival to Germany. Most are junior enlisted troops heading to their first assignment and have never been overseas before.

Marable is one of roughly 60 reserve soldiers from the 7th Mission Support Command, a U.S. Army Reserve unit headquartered at Kaiserslautern’s Daenner Kaserne, who spent this summer caring for new arrivals during a 14-day lockdown, designed to reduce the spread of the virus.

“I try to be there for them as much as I can,” Marable said, a human resources specialist with the 83rd Combat Sustainment Support Battalion. “If they need someone, they come and get me.”

Like most reserve soldiers, Marable brings civilian skills to his job. When not in uniform, he is a personnel specialist in Baumholder. He’s often used his connections, plus a deep knowledge of German culture and the local area, to help new soldiers adjust.

“If I see somebody who is struggling, I will tell them what I know and about the pitfalls I had to endure so they don’t have to themselves,” Marable said.

For two weeks, while transient soldiers are under restricted movement, large open warehouses are their home. They take online training, stay in shape with physical fitness sessions and hang out at the USO. They must march in groups to the dining facility — a large tent that is reminiscent of field conditions — and to the local convenience store. Other than that, they socialize with their masks on, play video games or cards or use free WiFi to call home.

“The cadre are treating us pretty good,” Army Staff Sgt. Kendall Eason, who is starting his second tour in Germany, said. “The USO also supplies tons of stuff, and I didn’t expect that, so it is a plus.”

Soldiers are tested upon arrival. Ten days later, they undergo a follow-up test. Any soldiers who present symptoms or tests positive are brought to a separate facility and cared for by medical professionals. Trace teams contact anyone close to those soldiers. They are then separated and monitored.

Soldiers with families, plus senior enlisted and officers, are housed in other locations at U.S. Army Garrison Rheinland-Pfalz, where their movement is also restricted. Measures to limit COVID-19 transmission are in accordance with German regulations and in some cases stricter than off-post. The local German press recently reported how impressed host nation officials were with the high standard of the U.S. military’s COVID-19 restrictions.

Most soldiers arrive at nearby Ramstein Air Base then travel by bus to ROB. Awaiting for their initial COVID-19 test results is their first task.

Begun in March, as a cooperative effort between the 21st Theater Sustainment Command and USAG-RP, the task force has since cared for thousands of soldiers. In June, reserve soldiers from the 7th MSC stepped in. At the end of September, the 21st TSC’s Special Troops Battalion will continue the mission.

“I thought we were going to be quarantined in our quarters at our unit,” Army Sgt. Joshua Cueno, who is joining the 44th Expeditionary Signal Battalion in Baumholder, said. “I was a little unprepared for that. I know some of the other guys were too.”

Cueno, a signal noncommissioned officer from San Diego who previously served in Iraq, said some transient soldiers arrived without some important personal items, including towels. Task Force staff and the USO stepped in.

“They had some extra supplies, so some of the guys were able to get toiletries and stuff like that,” Cueno said.

Protecting Defense Department personnel is a top priority, according to Defense Secretary Dr. Mark T. Esper. In U.S. Army Europe, unaccompanied soldiers heading into barracks could potentially spread COVID-19 and affect readiness. Therefore, it was important for the Army to build a program that cares for incoming soldiers and protects the force.

“People are the most important when it comes to combating this pandemic,” Army Lt. Col. Andrea Talbert, 83rd CSSB commander, who has led TF-Willkommen since July, said. “It’s our honor and our duty to care for incoming personnel while protecting the force and the people in our host nation.”

More than 1,400 soldiers completed the two-week cycle since July. Afterward, they move to units across Germany, ready to support Army missions, Talbert said.

“We are very dedicated and proud to support our active duty counterparts,” Talbert added. “By doing this here, receiving units can remain focused on their missions and not worry about COVID-19 in their formations.”