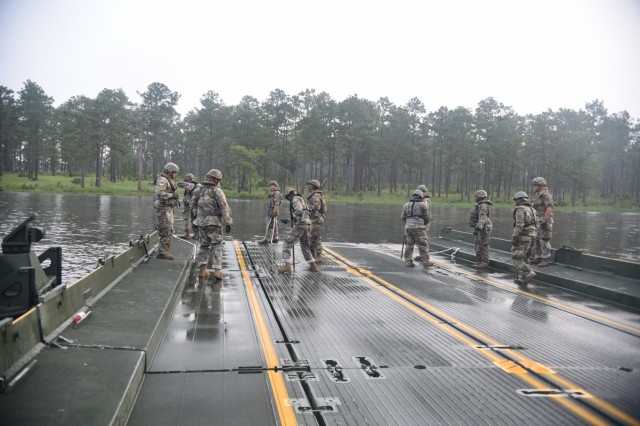 Army engineers call the operation a Wet Gap Crossing. Engineer Soldiers secure and control an area of water, be it a lake or river, and use floating platforms that will allow bulky fighting and transport vehicles to pass.

Col. Kenneth Shubert, the 926th commander, explained that the mission is inherently dangerous and a key significance of which others may be unaware.

“There are hundreds of rivers (in contingency operations) we may need to cross and we cannot rely on civilian bridges to be there,” he said. “They may not support the equipment we need to cross and an enemy may deny us the use of a bridge by compromising its integrity. We have to be able to cross on our own.”

Army engineer Soldiers unfold specifically designed collapsible platforms from trucks directly into the water where a team on a boat moves the buoyant piece to where the vehicles need to cross. Then, another truck delivers the next piece to the water for another boat team, and so it goes until the team secures all platforms together, creating a floating bridge.

In this case, the National Guard MRBC built half while the Army Reserve assembled the other. The concept seems simple enough; however, the operation takes massive coordination to plan.

“It takes a lot of planning to make this kind of exercise happen,” said Shubert. “We planned for over a year to bring all of the units and logistics requirements together.”

With so much involved, it seems unlikely such a feat is possible with bullets and explosions going off around Soldiers. Yet, Shubert emphasized the need for Soldiers to practice the complex tasks to establish muscle memory for when/if they meet aggressive conditions. The bridge took about two hours to construct at Fort Stewart, but the Soldiers could need to build it in less than 20 minutes in a dangerous setting.

Maj. Thomas Williamson, the 926th Operations Officer, agreed with and expanded upon Shubert’s assessment. He clarified that the multi-component domestic event has much more risk in a theater (overseas) environment.

“Wet Gap Crossings are inherently one of the most dangerous operations a maneuver force needs to execute and the engineer assets are critical to ensuring success,” said Williamson. “The Soldiers building the bridge have to stand in the direct line of fire.”

He further explained that massive equipment used for the crossing offered no real protection in a firefight.

“The equipment is an incredibly soft target,” said Williamson. “There is no armor on a bridge. It has to float.”

So, whenever units with large trucks and equipment need to cross a body of water while overseas in hostile territory, who do they call? The Engineers. For that reason, Shubert stressed the significance of preparation.

“It is important to train and be practiced in this mission because large-scale combat operations in potential theaters of combat will require Wet Gap Crossings,” he said.

With the import of this task and its need for more training, engineer units clearly have a pivotal role in logistical and combat movements.