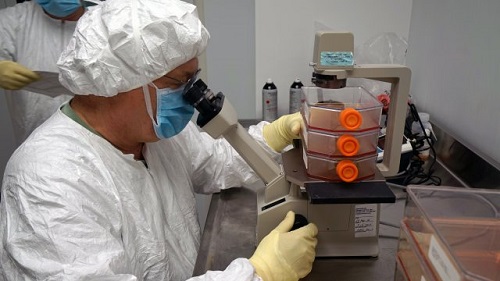 JULY 6, 2016, WASHINGTON (Army News Service) – Doctors at the Walter Reed Army Institute of Research who have developed a Zika vaccine that they’ve successfully tested on mice are now testing it on monkeys and hope to begin testing on humans later this year.

Their study, published, June 28, in the journal Nature, demonstrated how mice developed immunity to the Zika virus after injection with a purified inactivated virus vaccine, called ZPIV.

The study also involved a second type of vaccine developed by research collaborators at Harvard Medical School. This DNA vaccine was tested at the Beth Israel Deaconess Medical Center, and the research involved scientists from all three organizations.

Findings indicated that single shots of either vaccine protected mice against Zika, but Col. Stephen Thomas said WRAIR researchers are focusing on ZPIV because it builds on a type of vaccine that has already been licensed.

“Walter Reed has been working on flavivirus vaccines for more than a century,” said Thomas, an infectious disease physician who is the WRAIR lead for the Zika vaccine. The flavivirus family of diseases includes West Nile virus, dengue and yellow fever–and Maj. Walter Reed’s research in the 1890s eventually helped eradicate yellow fever.

“We started to conceptualize the development of the Zika vaccine actually a couple of years ago,” Thomas said. He explained that WRAIR researchers had spotted outbreaks of the disease that resembled dengue in Southeast Asia and French Polynesia.

This past fall, however, they realized there could be a serious need for a Zika vaccine here in America.

While their published research focuses on mice, WRAIR “almost in parallel” began experimenting on primates, Thomas said. They believed rhesus monkeys could have reactions to the vaccine that might more closely correspond to human reactions.

While their non-human primate research is all but complete, Thomas said the results have not yet been finalized and cannot be released. The one thing he could say is “we remain optimistic.”

The goal is to begin clinical studies with humans by the end of the calendar year, Thomas said.

But when will the vaccine be approved for distribution? “That’s the 60-million-dollar question,” Thomas said, adding that it usually takes a number of years to license a vaccine.

“I don’t think we’re looking at the normal timeline of almost up to a decade,” he said.

“Hopefully that’s not going to be the case here, because we’re in the middle of an epidemic and an outbreak that’s taking a significant toll on the affected countries.”

Several service members were recently infected by Zika. “It’s emerging as a DOD issue,” Thomas said, adding that U.S. forces are deployed to areas in Southern Command that are “Zika-endemic.”

“Our institution’s number one mission is to preserve and ensure operational readiness,” he said about WRAIR.

About two dozen WRAIR personnel are researching the vaccine and conducting the tests, Thomas said. Another half dozen are working in Africa and Asia on bio-surveillance activities, he said.

Col. Nelson Michael is the WRAIR Zika program co-lead and he also runs the military HIV research program. “He’s the one that has the primary relationships with Harvard,” Thomas said.

The Pilot Bioproduction Facility at WRAIR is now manufacturing small doses of the ZPIV vaccine to be used in clinical studies.

Clinical research will be conducted at the WRAIR facilities in Silver Spring, Maryland, and studies will also be conducted elsewhere by the National Institutes of Health vaccine trial evaluation units, Thomas said.

The National Institute of Allergy and Infectious Diseases, or NIAID, will actually be the regulatory sponsor of the study, “not the Army,” Thomas said, “but it’s an Army vaccine, funded by the Army.”

Data, of course, will be shared with regulatory agencies such as the U.S. Food and Drug Administration. FDA must have confidence in the vaccine’s safety before it can be produced on a large scale, Thomas said.

Even then, though, someone has to be able to mass produce the vaccine at a scale where it can make a difference in world health, and that’s millions of doses, Thomas said. So WRAIR is also exploring possible collaboration with pharmaceutical companies.