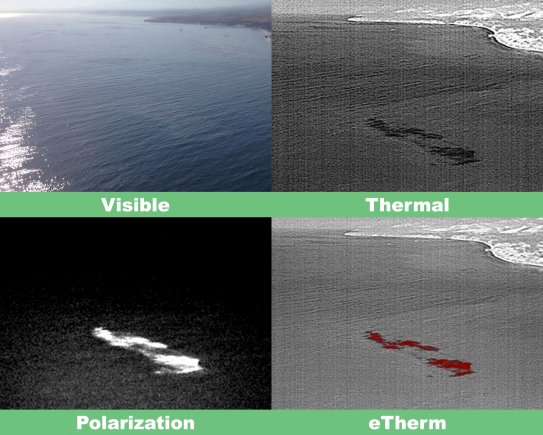 Researchers created the IR polarimetric camera by integrating a pixelated polarizing filter into what’s known as a microbolometer. This innovation allows the camera to detect polarization contrast in the environment even when thermal contrast isn’t present.

A significant amount of effort was focused on refining the assembly of the camera and implementing software upgrades that help users obtain a better understanding of the unique nature of the polarimetric data.

“The physics of polarization is complicated, and our software enables the user to quickly and easily explore how signatures are impacted by materials and geometry in the scene,” Chenault said. “The analytical tools in our software makes comparing the performance of image metrics in the polarimetric video easy.”

In addition, thermal polarimetry has also allowed researchers to conduct human identification and facial recognition in complete darkness, a feat previously thought to have been impossible.

“As we found more and more new applications for thermal polarimetric imaging, it only made sense to work on making the camera systems smaller, more rugged and cost-effective,” Gurton said.

Ultimately, the Army contracted Polaris to develop such a system. The resultant IR polarimetric camera has successfully demonstrated its capabilities in handheld, vehicle-mounted and UAS-mounted platforms in multiple field tests.

“The Pyxis camera is small enough to mount on Class 1 UAS,” Chenault said. “We even have a ‘drone kit’ for quick integration onto many off-the-shelf drones.”

As a small business-developed technology, the infrared camera for drones demonstrates a potential variety of different commercial applications.
One such application is the detection of oil spills. The polarization sensitivity is able to very effectively detect oil as thin as 50 micrometers even in the presence of waves and emulsifiers used in spill clean-ups.

Once deployed on a commercial airborne platform, these cameras may soon be used to monitor oil processing and transportation facilities, such as refineries, pipelines and transfer stations, as well as ports, harbors and shipping lanes.

The Pyxis camera also shows promise in detecting snakes for ecological rehabilitation. Initial tests in the Everglades have shown that IR polarization is one of the more effective ways to detect pythons which have become a significant problem as an invasive species in Florida. The drone-mounted Pyxis may be able to assist python hunters with finding snakes in inaccessible locations.

“We’re incredibly excited about both of these applications because of the positive impact they could have outside of the military,” Chenault said. “It’s not every day that you get to go on a snake hunt as part of your job.”

For both these applications, researchers are looking into incorporating man-in-the-loop interfaces and autonomous software that will allow the camera system to automatically send alerts with text and images whenever it detects the desired target.

Researchers and their commercial partners are also combining the camera’s unique polarization imagery with machine learning algorithms in order to improve its capabilities.

The IR polarimetric camera will only require a few more finishing touches before it is ready for deployment, Chenault said.

“We believe the capability is ready now; it just needs to be integrated in its final form onto the objective platforms,” he said. “Direct interaction with the right program offices will start the process to get the technology in the hands of the Soldier.”