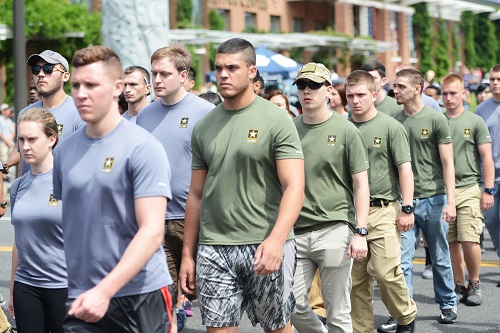 That’s according to the Army’s senior recruiter, Gen. Jeffrey J. Snow, commander of Army Recruiting Command, and it’s one that might discourage otherwise interested American youth from pursuing a great opportunity with the Army.

The general knows that, despite the high value the Army places on education for its enlisted service members, there is a perception among the civilian population that officers go to college and enlisted Soldiers don’t. It’s one of many myths his recruiters face.

“I will tell you, the vast majority of NCOs I know serving in the Army may have come in with just a high school diploma, but over time they have (obtained) an associate’s degree, a bachelor’s, or a master’s,” he said, “because of the Army’s emphasis on education.”

Snow believes that the reason so many civilians are ill-informed is that so few actually know somebody who is in the Army. That’s a problem, Snow said, and one recruiting command is working to address through its “Reconnect with America” campaign.

“It’s our effort to make sure the American public understands us,” he said.

Another myth, according to Snow, is that the Army is a “last resort” for those who enlist. He said it’s a common belief that those who choose to enlist do so because they can’t get into college or they can’t find a job.

“I just don’t find that to be the case,” he said. “The young men and women I interact with in my own formation, they had choices. This myth that the Army is a last resort, I just don’t buy it.”

He bristles at the notion that the Army would meet its recruiting goals by harvesting desperate recruits who are driven by a lack of opportunity, but he concedes the Army always wants the best, and the best can come from anywhere in the country, including high-unemployment areas.

Another potentially misleading belief found among young people and their families is that joining the Army means that they will be injured in combat, or develop post-traumatic stress disorder, or lose a limb. It’s not an unfounded belief, Snow admitted, but many overestimate the threat.

Is soldiering dangerous? It sure is, Snow said. But it’s not as dangerous as some parents may think.

“Obviously, we are charged with defending our country. But the reality is, only (a small percentage) of young men and women (who join, will face) direct or indirect fire, (and) are actually subject to those types of threats.”

For the first time in half a decade, Army Recruiting Command will meet its recruiting goals for both the Regular Army and the Army Reserve.

This year, for the regular Army, that goal is 62,500 people. For the Army Reserve, the goal is 15,400. The Army National Guard conducts its own separate recruiting, but if their numbers were included, the total Army recruiting goal for 2016 would be nearly 120,000 Soldiers, by Snow’s estimate.

“That’s certainly a credit to the hard work of our 12,500 recruiters and staff stationed around the world,” he said.

Some may wonder why it is that, with the conflicts in Afghanistan and Iraq drawn down and the Army downsizing, the Army should continue its recruiting efforts. It’s just another myth, Snow said, that the Army needs to recruit only during wartime.

“The Army is a pyramid, and we continue to bring in the new people at the bottom each and every day,” he said. “So yes, we are downsizing, but also yes, we are open for business.”

A new twist on recruiting now, Snow said, is the pursuit of female recruits for combat duty. In years past, women were denied the opportunity to select combat arms jobs like their male counterparts. That’s no longer the case.

So far, he said, just over 100 women have enlisted into combat Military Occupational Specialties that were formerly designated only for men. That might not seem like much, he said, but it’s just the beginning. It remains to be seen how the combat roles of women will evolve in the future.

“We expect this to be gradual over time,” he said. “But the fact that these remaining MOSs are open now — essentially, the sky is the limit for them. We expect that…there will be a gradual increase in desire to pursue some of these other specialties.”

Snow said the Army’s initial approach to integrating women into combat arms roles — through the use of a “leader first” approach, “is the right approach.” That involves putting female officers first into traditionally closed specialties, and then following that with training for NCOs who have reclassified.

Women make up about 51 percent of the general population of the U.S., but within the Army, women represent about 14 to 15 percent of Soldiers. And within the recruiting community, women make up only about 8 to 9 percent, according to Snow.

That’s a problem for the Army, he said. It should be easier to bring women into the Army with a cadre of recruiters who better represent women in service. It’s one of the things Snow is focused on now, he said, but it’ll be a multi-year effort to make improvements in female representation among recruiters.

In the meantime, the Army will begin training new women recruits next spring, between January and March 2017, for those combat arms roles.